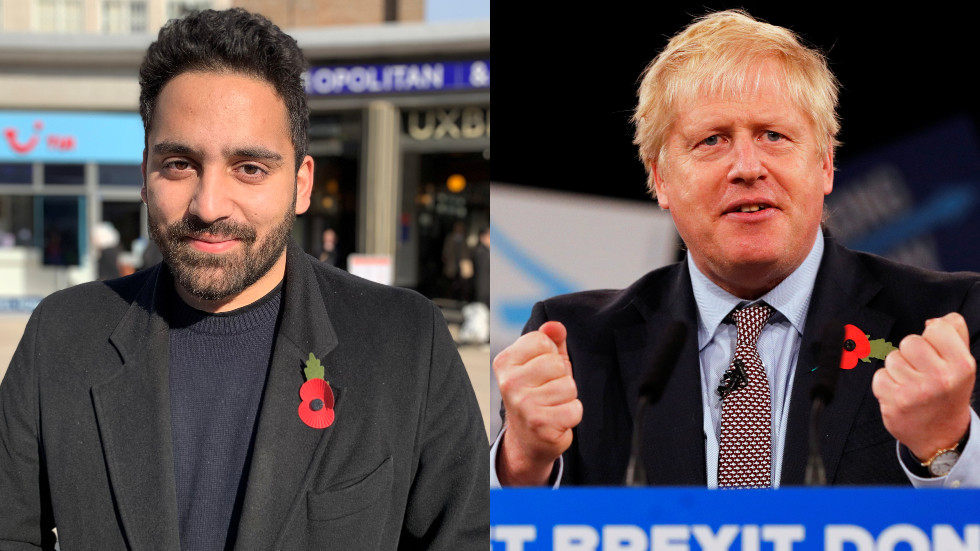 The UK political history books may well have to be ripped up as a 25 year-old Muslim immigrant tries to topple Boris Johnson in his constituency in the upcoming election. Can the unthinkable happen?

Ali Milani is Johnson’s Labour challenger in the west London seat of Uxbridge and South Ruislip. He was born in Tehran and has been living in social (public) housing in the UK since the age of five – his upbringing couldn’t contrast more starkly from that of the 55 year-old Eton- and Oxford-educated Johnson.

Johnson is defending a 5,034 majority, but one that was more than halved at the 2017 general election. If Milani can secure a five percent swing in favor of Labour then he will unseat the UK prime minister, who would then become the first in UK political history to suffer the humiliation.

“We only need a 5 per cent swing in Uxbridge and South Ruislip to defeat Boris Johnson."

Labour's candidate there, Ali Milani, says: “There are very few times in very few elections where you can say a single seat can change the course of the country”#Newsnight | @ARMilani_ pic.twitter.com/zl5jcL24jq

The bookmakers have Johnson as the odds-on likely winner but, at 4-1 second favorite, Milani is well positioned to give the PM a good run for his money.

There has been widespread media speculation that Johnson has been considering pulling out of competing against Milani in this London constituency, in favor of a more comfortable-looking seat with a bigger Tory majority – to make sure he is re-elected.

So what are the factors that could decide this contest?

What is not known is how big a factor Brexit will play in this election. It’s solidly dominated people’s TV screens and the airwaves in general since the last election, but the five-week campaign does allow for other issues to come to the fore.

Uxbridge and South Ruislip voted in 2016 to leave the European Union but analysis of YouGov polling by Focaldata suggested support for Remain had increased there from 44 to 51 percent in August 2018.

The apparent shift may well benefit Milani, with his Labour party offering a second EU referendum, but it could also lead to more votes for the Liberal Democrats who are campaigning to cancel Brexit – splitting the vote to the benefit of Johnson.

With over 500,000 members, Labour’s ground forces out knocking on doors could be a real asset for Milani, who has posted a picture of 250+ activists gathered on one night to support his campaign. The Labour grassroots group, Momentum, using technology inspired by Bernie Sanders’ US campaign, has created an app that provides key information on when and where events take place in an effort to mobilize their ground game.

Emotional at the incredible support tonight.

250+ people showing up on a cold, dark, Tuesday evening. The energy, hope and optimism is incredible.

We can win.
We can beat Boris.
We can transform this country.#UnseatBoris 🌹 pic.twitter.com/VAswkAaR0U

Milani himself believes that Johnson not living in his constituency and reneging on his promise to block a third runway at Heathrow – which would affect their residents – could count against him.

Without doubt Johnson has a real contest on his hands to keep his seat and remain prime minister if the Conservatives are elected on December 12. He’ll be hoping his new status as Tory PM will be the crucial factor in securing a win but, in these volatile political times, nothing is nailed on.