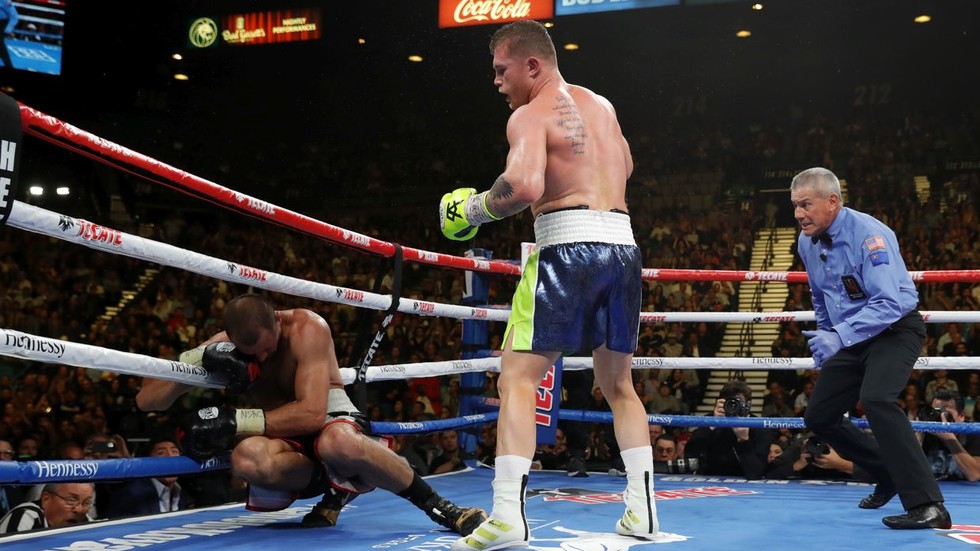 Alvarez rocked Kovalev with a left hook before detonating a right hand onto the Russian’s chin, finishing the fight with just under a minute remaining in the 11th round and leaving Kovalev slumped in a mangled heap against the ropes.

The Mexican had gone up two divisions to take on Kovalev, and the result at the MGM Grand appeared as if it could be decided on the judges’ scorecards after a largely even bout had ebbed and flowed up until the 11th round.

But Canelo had other ideas as he stepped things up with a minute to go in the round, walking forward through Kovalev’s jab before unloading his left hook-right hand combo to devastating effect.

‘Krusher’ Kovalev lay crumpled against the ropes, and such was the destructive nature of the KO that Canelo refused to celebrate until he knew that the Russian had regained his senses.

The 36-year-old was later taken to hospital as a precaution, and will be left to contemplate where he goes from here after suffering his fourth defeat his 39-fight career, in what was his 16th world title fight.

For Canelo, 29, it was another strap to add to light-middleweight, middleweight and super-middleweight titles he had won prior to knocking out Kovalev, and means his only defeat in 57 bouts remains his decision loss to Floyd Mayweather Jr in 2013.

After Saturday’s fight, the Mexican great said he could consider a trilogy against Kazakh middleweight rival Gennady Golovkin, against whom he has drawn and claimed a decision victory in past outings.

On Saturday night in Vegas, Canelo certainly dealt with business in emphatic fashion.