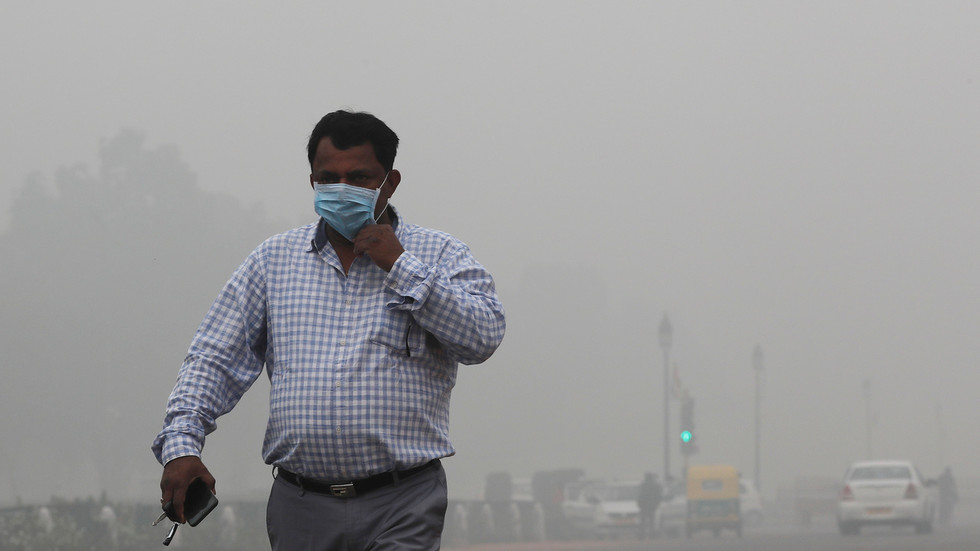 Air pollutant readings monitored by the US Embassy in the city hit 810 micrograms per cubic meter on Sunday morning – over 30 times the World Health Organisation’s safe daily limit of 25. The pollution in some parts of the city exceeded recordable levels, according to local reports.

Delhi-NCR this morning. Can't escape the burning smell even inside the home. No visibility. Buildings in the front have disappeared. This is collective death sentence. #DelhiAirEmergency pic.twitter.com/UzYXjRk8Dz

The view from my balcony Is no view at all. I have a persistent head ache. This is sick. #DelhiPollution #DelhiSmog pic.twitter.com/YQxZcRusD1

Schools in the neighboring cities Noida and Ghaziabad have been ordered closed due to the pollution.

Thirty-two flights due into Delhi on Sunday were diverted because of the intense haze, and the airport tweeted that even though some flights are taking off and landing, passengers due to travel should check the status of their flights with their airline.

Smog is a serious hazard for Delhi and a host of other Indian cities every winter, thanks to a combination of industrial emissions, stubble-burning on surrounding farmland after crop harvests, and heavy traffic fumes. Angry and concerned locals shared alarming images on social media of the horrific air quality outside their homes and called for politicians to finally properly address the problem.

“Didn’t ever think we will see a day so grim when we would have to fight for our Right to Breathe,” one wrote. Another pointed out that the “silver lining is that at least the politicians are breathing the same air as the rest of us.”

Flight to Delhi got diverted to Lucknow due to severe smog. For the first time I’m actually relieved. AQi in Gurgaon – 800. WTF 😑

Many also expressed their disbelief that a cricket test series between India and Bangladesh which is being hosted by Delhi is still going ahead despite the hazardous air quality.

A recently published public health study found that pollution killed more than 9 million people globally in 2015, with 2.5 million of those deaths occurring in India.