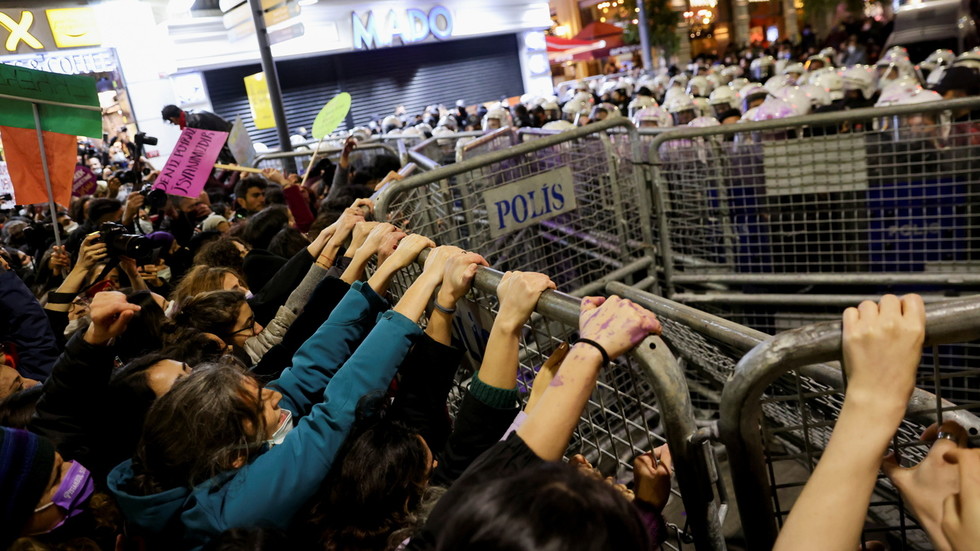 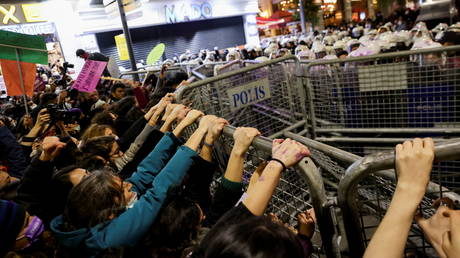 Turkish riot police unleashed tear gas to disperse a large crowd of demonstrators protesting violence against women in Istanbul, as well as the government’s withdrawal from an international treaty devoted to combating it.

The massive group of protesters, reportedly numbering in the thousands, marched to Istanbul’s Taksim Square on Thursday to mark the International Day for the Elimination of Violence Against Women. They met a heavy police presence in the square, which was barricaded off by officers clad in riot gear, who proceeded to fire tear gas on the crowd after ordering it to disperse.

Scuffles with police were captured in videos circulating online, showing officers moving in on the demonstrators to clear them from the area as tear gas wafted through the air.

On the Day for the Elimination of Violence Against Women, state violence is practiced against women protestors by state Police. #Istanbul #Turkey
pic.twitter.com/H1pD6Z9tcT

Protesters were also seen carrying a colorful assortment of signs and banners, some even toting flares, while others chanted anti-government slogans and demanded an end to what’s been dubbed by some activists as ‘femicide.’ Some 345 women in Turkey have been killed in acts of gender-based violence so far this year, just shy of the 410 reported in 2020, according to We Will Stop Femicide, a women’s rights group.

in the face of intense police presence, protesters gather on istiklal to call for an end to violence against women pic.twitter.com/xr0nRMcWmB

The protest, which was mirrored on a smaller scale in other cities across the country, comes after the Turkish government formally withdrew from an international treaty meant to address violence against women in July. Known as the Istanbul Convention, the pact was originally negotiated in the same city in 2011, but President Recep Tayyip Erdogan’s decision to pull out of the deal has been sharply criticized both by local activists as well as foreign leaders, with US President Joe Biden calling the move “deeply disappointing.”

Ankara claimed the convention had been “hijacked” by “people attempting to normalize homosexuality,” which it said was “incompatible with Turkey’s social and family values.” Nonetheless, the government insisted it would not “give up on its fight against domestic violence,” and would “continue protecting the safety and the rights of all women.”