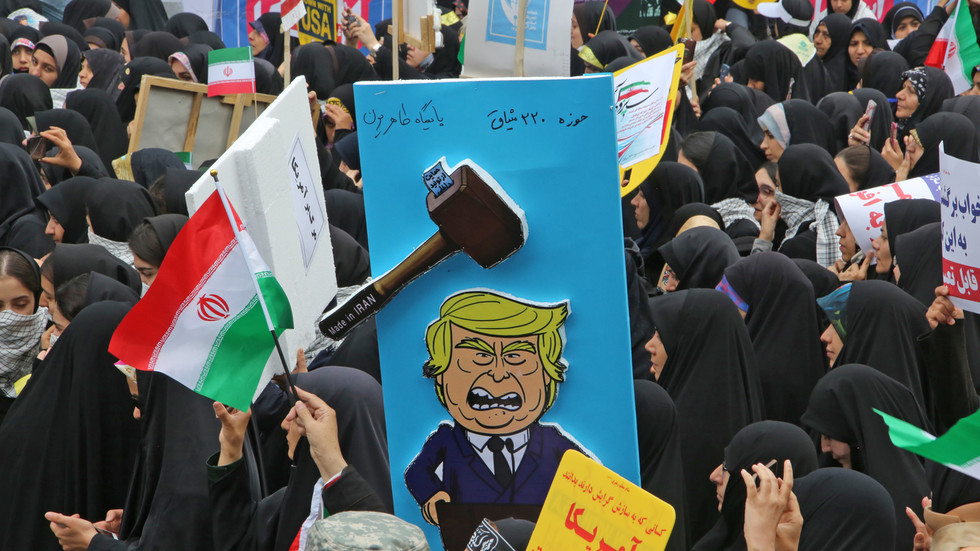 Thousands of people gathered at the former US Embassy in Tehran and other Iranian cities on Monday, chanting ‘Death to America’ and ‘Death to Israel’, marking the 40th anniversary of the US Embassy takeover.

Demonstrators were seen burning US flag replicas and waving signs mocking President Trump. In preparation for the anniversary events, Iranian officials unveiled new anti-American wall murals at the former embassy – still referred to as the ‘den of spies’ in Iran – depicting a crumbling Statue of Liberty, Mickey Mouse with a smoking gun, the Global Hawk spy drone downed by the Iranians earlier this year, and skulls floating in blood.

Speaking in front of the former mission in Tehran, the commander of the Iranian Army, General Abdolrahim Mousavi called America a “scorpion” and claimed the “era of imposing pressure with zero expense is over.”

State TV aired footage of rallies and marches from other cities across the country with people chanting slogans against the United States and Israel, which Iran sees as a US ally and its own regional foe.

In a televised speech on Sunday, Supreme Leader Ayatollah Ali Khamenei renewed a ban on talks with the United States. “One way to block America’s political infiltration is to ban any talks with America. It means Iran will not yield to America’s pressure. Those who believe that negotiations with the enemy will solve our problems are 100% wrong,” he said.

The Iran hostage crisis started after hundreds of Iranian students who supported the Iranian Revolution took over the US Embassy in Tehran on November 4, 1979. Fifty-two US diplomats and citizens were held hostage inside the embassy for 444 days.