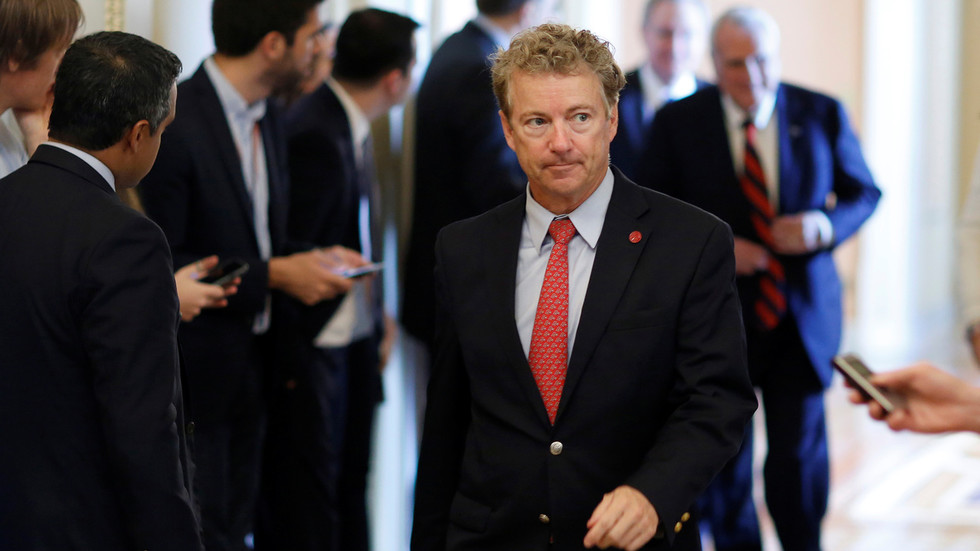 Senator Rand Paul (R-KY) has fired up crowds at President Donald Trump’s rally in Kentucky, alleging that the Ukrainegate whistleblower’s name has been an open secret and called on the media to finally make it public.

Paul, who represents Kentucky in the Senate since 2011, was invited on stage by President Trump during an election-eve rally in Lexington on Monday, in a bid to drum up support for Republican Governor Matt Bevin.

“I say tonight to the media: DO YOUR JOB AND PRINT HIS NAME”

As he took the floor, Paul commended Trump for “his great courage” in facing the “fake media” every day, before calling on Congressional Republicans to band together and protect the president.

He went on further to allege the whistleblower’s name is a thinly-veiled secret, and claimed that the individual who set off the whole Ukrainegate saga had at some point worked for Democratic 2020 frontrunner Joe Biden.

“We also now know the name of the whistleblower. The whistleblower needs to come before a Congress as a material witness because he worked for Joe Biden at the same time Hunter Biden was getting money from corrupt oligarchs.”

Paul rounded off his tirade by directly calling on the press to reveal the whistleblower’s name to the American public.

“I say tonight to the media: Do your job and print his name,” the Kentucky Senator said, eliciting loud cheers the buoyant crowd, chanting: “Do your job!”

Congress, Paul noted, must be given a chance to hear directly from Biden’s son, Hunter, as well as the whistleblower.

“And I say this to my colleagues in Congresses, to fellow Republicans in Washington: Step up and subpoena Hunter Biden and subpoena the whistleblower!”

If House Intelligence Committee chair Adam Schiff attempts to derail this effort, “every Republican” should denounce the proceedings as “a farce,” he added.

Last week the senator shared an article on Twitter that purports to identify the CIA operative behind the Ukrainegate in the name of the “public interest.”

The rally took place just hours after the release of a 300-page transcript of former US ambassador to Ukraine Mary Yovanovitch’s testimony before the House Intelligence Committee last month. While the testimony does not incriminate Trump, nor does it help the impeachment cause, the anti-Trump #Resistance has latched onto the juicy bits in the brief 9-page “highlights” document which, although lacking context, paints Yovanovitch a victim of character assassination.

The whistleblower’s attorney Mark Zaid, meanwhile, said on Monday that his client would be willing to respond in writing to the questions from lawmakers. The impeachment inquiry revolves around the whistleblower’s allegation that Trump pressured his Ukranian counterpart Volodymyr Zelensky into investigating former Vice President Joe Biden over his role in ending a corruption probe into a Ukrainian energy company, where his son sat on the board. Last week, Congress voted largely along party lines to approve a resolution authorizing the House probe.