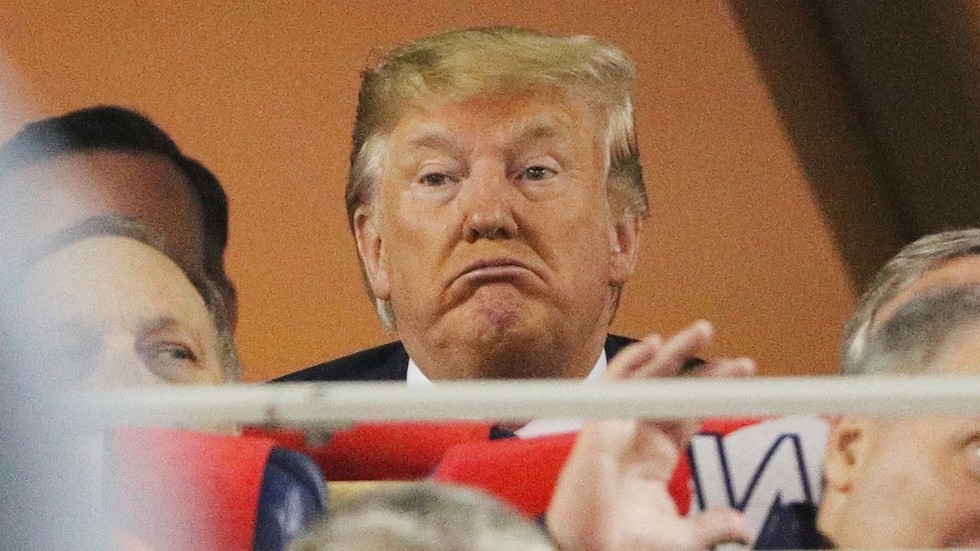 Even though Game 7 of the World Series was taking place 1,400 miles away, Donald Trump couldn’t escape the ire of the Washington crowd as he was booed while his campaign ad was shown during the broadcast at Nationals Park.

Trump attended the fifth game in the series between the Washington Nationals and the Houston Astros earlier this week but didn’t get a hospitable reception from the Washington crowd when he was featured on the stadium’s big screen during a break in play.

The 45th President of the United states was booed mercilessly while a campaign advertisement was aired in Nationals Park during a closed circuit broadcast of the game. This followed chants of “Lock Him Up!” directed at Trump in the wake of the ongoing impeachment inquiry which is miring his administration in controversy.

Trump wasn’t in attendance to hear the Washington crowd’s dissatisfaction with him this time around but the reaction was equally vociferous as the campaign commercial for the 2020 reelection appeared on screen during the Fox broadcast.

#Trump attempted to bounce back from the boo birds that showered him at his #WorldSeries appearance with a Game 7 campaign commercial at the viewing party at #Nats stadium and…..everyone booed again. He has to accept the fact that his approval rating in DC is just not very high pic.twitter.com/Qo2TJhQ20g

Trump just showed up in a commercial on the big screen at Nats Park… a few more boos hurled his way… (@wusa9) #WorldSeries #STAYINTHEFIGHT pic.twitter.com/sDc7fobAHl

For those keeping score…

The advertisement was a seven-figure purchase, per CNN, and took aim with the leagues of enemies the controversial politician has made in his near three-year spell in the American capital, as well as reaffirming several of Trump’s catchphrases like “Keep America Great” and “Promises Made, Promises Kept” which have appeared on his Twitter feed with increasing regularity in recent months.

Several of Trump’s supporters have defended the president from the vocal dissatisfaction with his performance, with his son Donald Trump Jr. railing against ‘Washington elites’ for disrespecting their commander-in-chief.

Trump could be set for a further negative reaction from sports fans this weekend as speculation suggests that he is tentatively scheduled to attend this weekend’s UFC 244 event in New York City.

As for Game 7 itself, the Nationals claimed the win by a score of 6-2 in Houston to clinch the crucial game in their series and take home their first-ever World Series.

The big question now is will the players be invited to the White House? And will they accept?