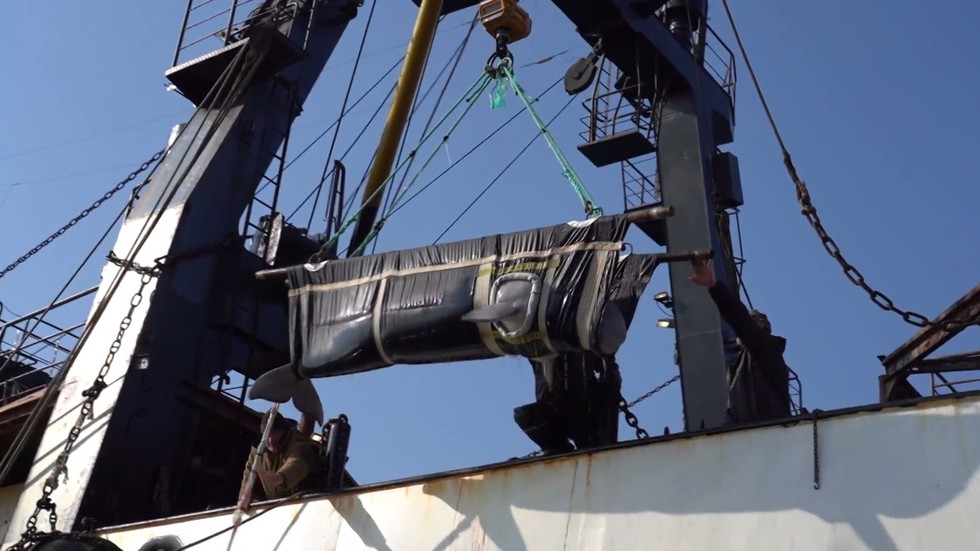 Their jail time is over, as the scientists began loading 50 beluga whales onto the ship to be released in the ocean. The animals’ fate made headlines after they were caught by a private firm and kept in tiny enclosures for months.

A grown white whale can weigh around 1,600 kilogram, so powerful cranes had to be used to get six belugas on board the Professor Kaganovsky research vessel on Tuesday.

But the weather then worsened at the Srednyaya Bay in Russia’s Far East and the scientists decided to halt the loading due to the risk of the animals getting injured. They said the operation will resume as soon as the conditions improve.

It’s planned that two vessels will deliver the belugas to a nature reserve area in the Sea of Japan where they are to be released into their natural habitat, thus ending the so-called ‘whale jail’ ordeal.

Last year, environmental activists sounded the alarm after discovering 87 belugas, 11 orcas and five baby walruses being held captive in poor conditions in the Primorye Region. The private firm that operated the facility said that it needed the animals for educational purposes, but the activists insisted that they were really intended for sale to aquariums and amusement parks in neighboring China.

The public demanded for the whales and orcas to be set free, with President Putin ordering the situation to be resolved swiftly. But the process still took months, becoming a costly and complex affair, both legally logistically. Russian laws didn’t forbid the capture of whales for “cultural and educational purposes,” at the same time, being vague on the option of them being sold. But the court eventually ruled that the animals were obtained illegally. The government since then promised to tighten the legislation so that only scientists and indigenous peoples could catch the whales.

Ocean explorer, Jean-Michel Cousteau, the son of legendary, Jacques Cousteau, was helping the Russian scientists with an advice on how to best organizer the release. The orcas and belugas are delicate creatures and in order for them to survive in the wild they needed to be in good shape and let go into the water with the temperatures fitting to their lifecycles. The fact that the animals already got used to living with humans and being fed by them was also a source for concern.

The first batch of marine mammals, which included all 11 orcas or killer whales, was released into the Sea of Okhotsk in late June.