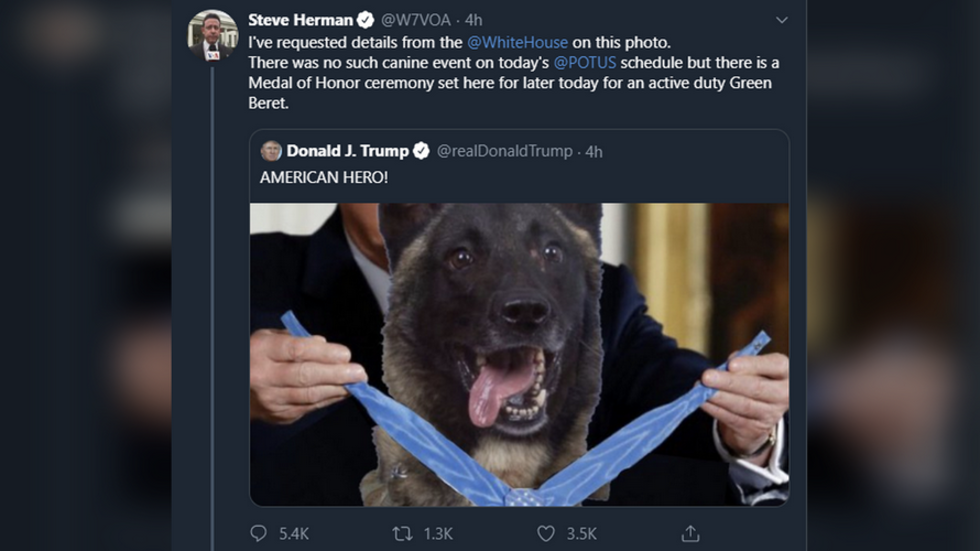 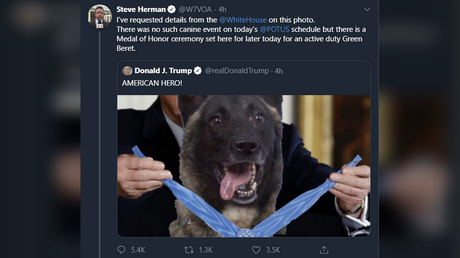 A muckraking reporter was ferociously mocked after he attempted to fact-check when Donald Trump tweeted a clearly photoshopped image of himself putting a medal on the neck of the dog who helped take down Abu Bakr al-Baghdadi.

Quick off the mark, Voice of America reporter Steve Herman tweeted that he had “requested details” from the White House, noting that there was “no such canine event” on Trump’s schedule, though there was a planned Medal of Honor ceremony set for later in the day. A mystery for the ages, indeed.

Herman’s very serious response to an obviously light-hearted dog tweet from the president appears to suggest the anti-Trump media may be so blinded by their hatred that even memes send them into a frenzy of rage and confusion.

I've requested details from the @WhiteHouse on this photo.
There was no such canine event on today's @POTUS schedule but there is a Medal of Honor ceremony set here for later today for an active duty Green Beret. https://t.co/NESINT9J4b

Herman was instantly ridiculed for his efforts, with many pointing out that the picture even retained a watermark from the Real Daily Wire — the conservative website responsible for creating the humorously doctored image in the first place.

Yet, the intrepid Herman could not be thwarted in his investigative efforts. He soon provided an update, confirming that a White House official had acknowledged the obvious — that the image was indeed photoshopped.

Herman’s update on the alleged mystery provided even greater fodder for the mocking masses.

Thank you for this stunning act of journalism and public service

“Whew. Thank goodness we got to the bottom of that one!” one tweeter wrote.

“Thank god for this hard hitting journalism. Dogmocracy dies in darkness,” said another.

Quite aside from Herman’s apparently failing meme-detection skills, the photoshopped dog image provoked a wide range of commentary on Twitter.

Some people can't take a joke.

While some were amused and eager to heap praise on the “American hero” canine, some were outraged over the “fake news” and “despicable” tweet, noting that the dog’s face had replaced that of US Army soldier James McCloughan, who Trump really did award a medal to.

Others were just exasperated that nobody seems able to take a joke anymore.

The liberal geniuses on Twitter have discovered this photo is "Photoshopped"! It's all over for Trump now! 😂 #TheLeftCantMeme