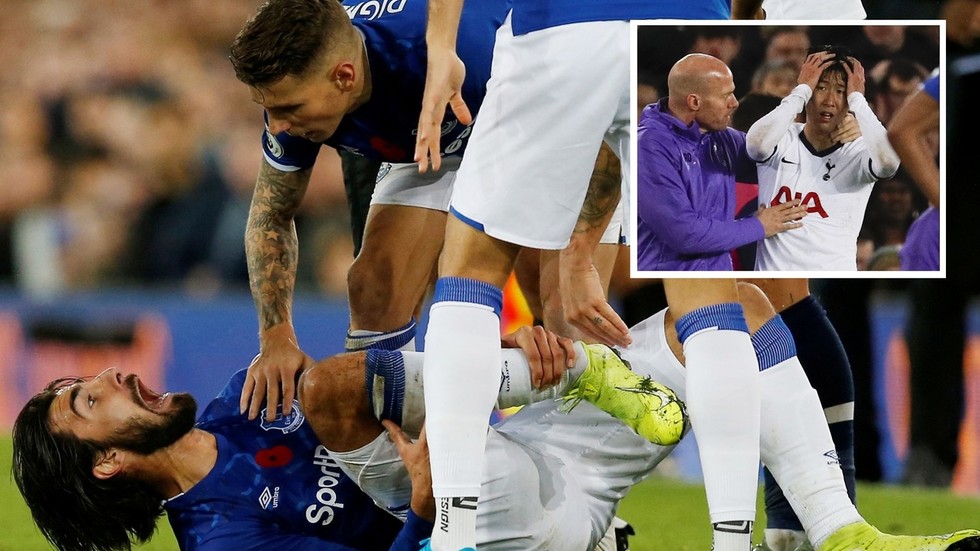 Everton forward Cenk Tosun has spoken about how he desperately tried to comfort teammate Andre Gomes after the midfielder suffered a horrific ankle injury against Tottenham which left Spurs’ forward Son Heung-min traumatized.

Gomes’ ankle contorted in horrific fashion, leaving him stricken and screaming in agony on the pitch as players and medical staff rushed to his aid. He was stretchered from the pitch and it was later confirmed that Gomes would undergo surgery on Monday at the local Aintree Hospital for a broken and dislocated ankle.

South Korean star Son was initially handed a yellow card but that was changed to red after referee Martin Atkinson consulted the VAR, although the striker was already distraught and in tears at the extent of Gomes’ injury.

Everton’s Turkish forward Tosun, who was seen attempting to comfort his teammate on the pitch, cradling his head in his hands, spoke about the distressing scenes.

“Everybody is so sad inside. Some players, they nearly cried,” Tosun said afterwards.

“Andre was in shock. His eyes were open so big. He was crying, shouting and screaming. I just tried to hold him and speak to him. I tried to tell him to stay calm. We couldn’t understand him. He was the one who had got the injury.”

Tottenham boss Mauricio Pochettino said that Son was “devastated” over his role in the incident, but added that there was no malicious intent from the South Korean – something which Everton boss Marco Silva agreed with.

“The players from Everton came to console [Son]. Of course, in the moment it was a little confusing. No one knows on the pitch when it was an action. The action was very, very bad luck,” Pochettino said.

The Argentine extended the club’s best wishes to Gomes, but also questioned whether Son should have been sent off for what was deemed “endangering the safety of an opponent.”

“We all feel so bad for Andre. I want to send my best wishes to him and his family for his recovery. We are going to talk about the VAR, the VAR need to check if it was a bad tackle and not a bad injury. We feel very disappointed with this situation by the VAR,” the Spurs boss said.

📝 | An injury update on @aftgomes.

We'll be with you all the way, Andre. 💙 #EFC pic.twitter.com/1OSatH4ljd

The horror incident came in the last 20 minutes of the game with Tottenham 1-0 up thanks to Dele Alli’s 63rd-minute goal. Everton snatched an injury-time equalizer through a Tosun header, leaving Spurs 11th in the table and the Toffees 17th.

Gomes, 26, is likely to be out for the rest of the season as he recovers from the injury. The Portugal ace joined the Merseyside club on loan from Barcelona last season, before the move was made permanent for a £22 million fee in the summer.