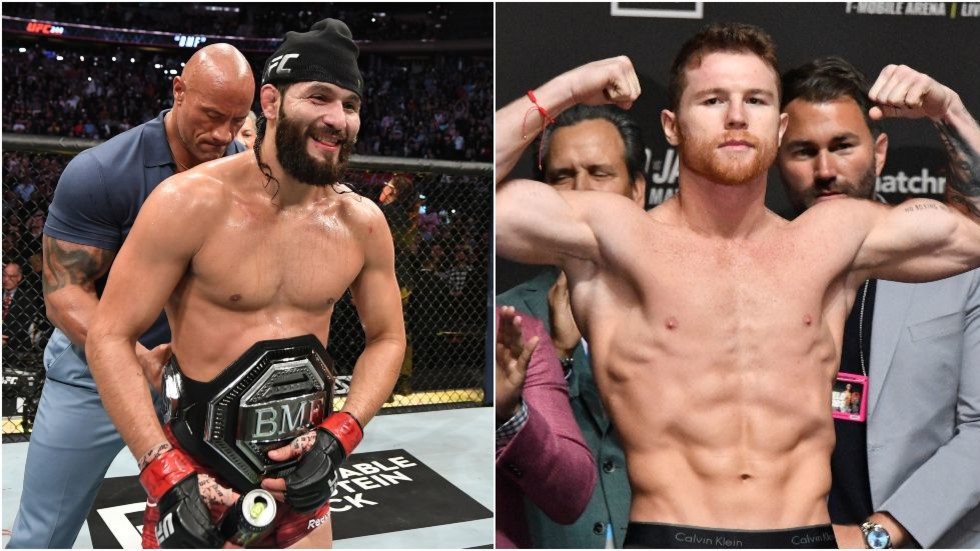 Both Jorge Masvidal and Canelo Alvarez earned big wins last Saturday night and the UFC’s newly-crowned baddest motherf*cker says that it makes sense for the two stars to test their mettle against each other.

Masvidal enhanced his status as 2019’s breakout fighter with a doctor stoppage win against Nate Diaz on what was the biggest stage of his career at UFC 244 in Madison Square Garden.

Shortly afterwards, and a couple of thousand miles away in Las Vegas, Canelo Alvarez, one of boxing’s biggest names, won a world title in a remarkable FOURTH weight class when he beat Sergey Kovalev to claim the WBO light heavyweight championship.

While it could be argued that both men clearly have claims to be considered BMF’s in their respective sports, Masvidal says that he wants to get into the ring with Alvarez in what would be the latest crossover bout between boxing and mixed martial arts.

“If Canelo wants to get his ass kicked that’s a fight I’ll take. I’m here to get the biggest checks possible,” Masvidal said to Ariel Helwani on ESPN.

“I’m dead serious about fighting Canelo Alvarez. If they give me nice little change, I will take my talents over there. I’m going for the off button man. I feel like I can shock the world.”

Alvarez is considered to be one of boxing’s top pound-for-pound fighters and can claim recent victories against Gennady Golovkin, Daniel Jacobs and Liam Smith in recent times, in addition to the win against Kovalev. The sole defeat in his 56 fights came against Floyd Mayweather six years ago.

Nonetheless, Masvidal is adamant that he has the tools necessary to succeed where the likes of Kovalev couldn’t.

“Canelo is a better boxer and has thrown 10,000 more jabs than me because that’s what he does morning and night, just box. So yeah he is a better boxer. But can I bring some elements that boxers aren’t used to, that are in the legal rounds of boxing and throw Canelo completely off his game? F*ck yes!

“I’m a naturally bigger dude and I punch like a f*cking truck and if I got those boxing gloves on I’m not afraid to break my hand so I’ll be able to hit a bit extra harder. I feel like I can be a legitimate ass threat in there,” he added.

Despite the speculation, there remains a significant stumbling block to any deal in the shape of Canelo’s promoter Oscar De La Hoya and his notoriously fractious relationship with UFC boss Dana White.

The Cuban-American fighter claimed he would “f*ck up” McGregor should the pair ever meet in the octagon, branding him “midget.”

That sparked a war of words with McGregor, with the latest riposte coming from Masvidal, who said: “Call Dana [White], tell your assistant’s assistant to call Dana White and throw some numbers at our way.

Whichever way he looks, Jorge Masvidal is a man with no shortage of options.