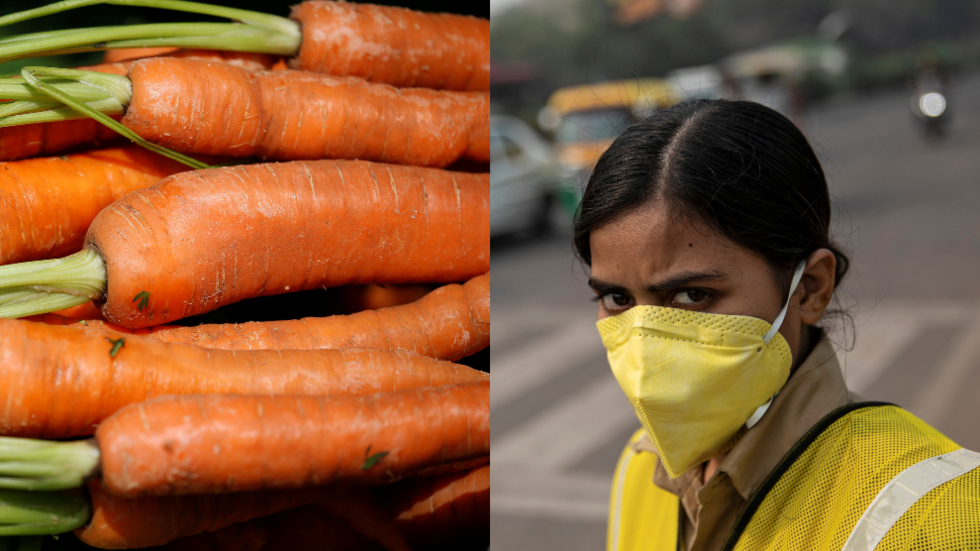 The city’s smog is reaching ‘hazardous’ levels, with air quality now ranking in the ‘severe’ category at over 30 times the World Health Organisation’s safe daily limit of pollutants. Schools have been shuttered and flights canceled as officials declared a public health emergency.

In perhaps one of the most ill-advised attempts at public outreach this century, Health Minister Harsh Vardhan tweeted out a truly remarkable health tip – accompanied by a graphic bordering on self-satire – in an attempt to help Indians cope with the dangerously-poor air quality.

“Eating carrots helps the body get Vitamin A, potassium, & antioxidants which protect against night blindness common in India. Carrots also help against other pollution-related harm to health,” Harsh Vardhan wrote, attaching what appears to be carrot clip art. “Munch your way to good health with winter carrots,” the graphic said, using double exclamation marks to emphasize the effectiveness of the airtight anti-smog solution.

As usual, cynics on social media rushed to criticize the well-meaning minister, who simply wanted to relay a remedy for his country’s unfathomably awful smog problem.

really pleased that you are not treating patients anymore and just doing carrot 🥕🥕🥕 politics.

Walnuts are considered to improve gray matter in brain and hence intelligence of an individual. May i suggest you to eat some walnuts to help you combat air pollution issue better!

It seems that many Twitter users couldn’t understand why the health minister was promoting carrot-eating as a way to battle a smog epidemic which killed an estimated 2.5 million people from pollution-related illnesses in 2015 – but what’s so hard to understand about carrots? They’re good for you!

We are in the midst of a publuc health emergency. For the many thousands who have to earn their livelihoods on the streets, for young children inhaling toxicity, for people losing years to toxicity- do you suggest eating carrots?

Shouldnt you focus on the right to breathe?

Such a shame.. this is the condition of @narendramodi @AmitShah cabinet minister of health. In such a health emergency he is promoting carrots. At least show that you are concerned and do something!!! #DelhiBachao #DelhiAirEmergency

While government officials tried to use social media to calm suffering Delhiites, irate celebrities – including Bollywood stars – used Instagram and other platforms to vent about the unlivable environmental conditions in the city.

“It’s so hard to shoot here right now that I can’t even imagine what it must be like to live here under these conditions,” film and TV star Priyanka Chopra wrote on Instagram, including a photo of her masked face.