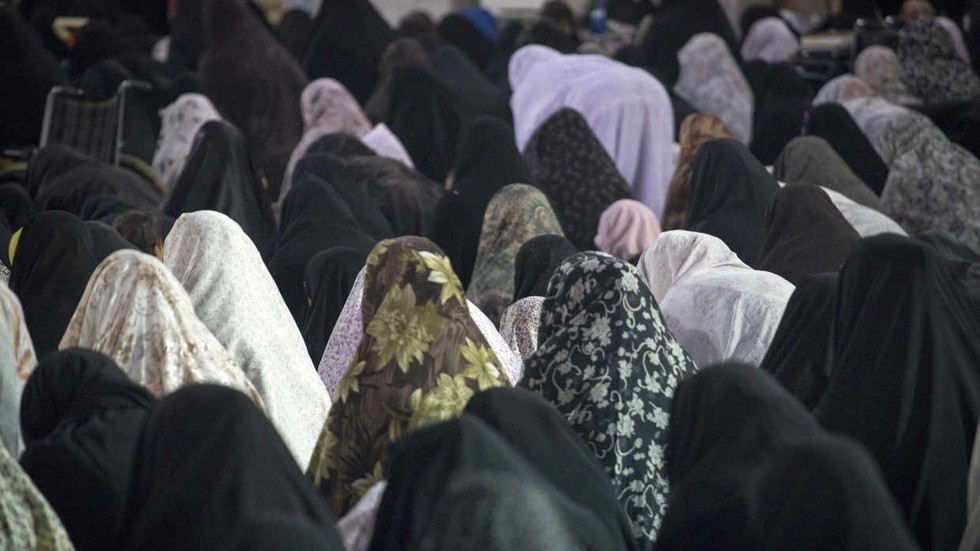 French satirical magazine Charlie Hebdo has weighed in on the Muslim veil controversy, recently reignited by President Emmanuel Macron, by publishing a caricature of him ignoring the alleged Islamization of the French society.

The cartoon – relatively innocent by the standards of the weekly – features a row of sad-looking women, donning Muslim veils, with Macron in front stating: “That’s not my business.” The picture is dubbed “Islamic republic on the move,” in a clear nod to the president’s party – Republic on the Move.

Not uncommon for Charlie Hebdo pieces, the cartoon sparked a fierce debate. Many accused the magazine of “drifting to Fascism” and producing quality content for the “far right.” Others, however, lauded the magazine’s ability to exercise the “free speech” and to stick to the traditions of the political caricature.

The cartoon refers to the debate on the Muslim veil, an issue raging in France for years. The controversy made fresh headlines on October 11, when a headscarf-clad Muslim woman showed up at the regional parliament in Bourgogne-Franche-Comté, accompanying her son’s class during a field trip. The woman was confronted by a politician from Marine Le Pen’s right-wing National Rally, Julien Odoul, who demanded she remove her veil.

The woman’s outfit, Odoul claimed, was a deliberate “provocation” that cannot be tolerated in wake of the recent stabbing of four French policemen. The woman, identified as Fatima E., has filed a complaint over Odoul’s attack since the incident, which she said left the class distressed and traumatized.

While full-face Muslim garments – as well as other kinds of masks – are banned in public spaces in France, headscarves are fine to wear. Still, they are prohibited in public schools “in the spirit of secularism,” alongside with other explicitly religious accessories, such as Jewish kippahs and large Christian crosses. Yet, there’s no law in France that forbids women from wearing headscarves – or anything else they please – during the field trips of their children.

Ambiguous stance of the Elysee

As the France-wide scandal grew, with some calling for a full veil ban while other urged the Elysee to protect the country’s “secularism,” Macron weighed in on the issue, warning against “stigmatizing” Muslims or somehow linking Islam with terrorism. “There is a lot of irresponsibility among political commentators… Communalism is not terrorism.”

But on October 24 he managed to reignite the veil row, stating issue was not “his business” altogether – or at least that’s what was ripped out of context and widely publicized by the French media, including Charlie Hebdo.

“Wearing of headscarf in public spaces is not my business, however, in public services, at school and while educating children, headscarf issue is my business. That is what secularism is about,” Macron said, adding that in certain neighborhoods in France, “some people use the headscarf as a symbol to break one’s connection with the republic.”

Macron’s statement seems to have left virtually everyone dissatisfied. Some said it was the first time in the history of the Republic that its leader said a public matter was not the state’s business, while others said the country needs a strong president, not Pontius Pilate. Macron’s stance on the veil issue was itself met with a mixed reaction, as some found his statement too weak and pandering to the Muslim community, while others, on the contrary, believed it to be ‘Islamophobic’ in essence.