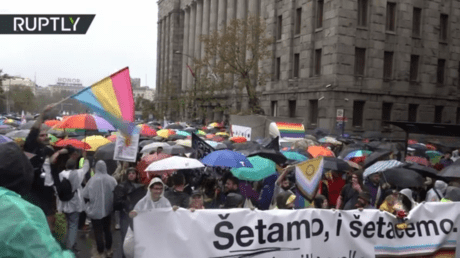 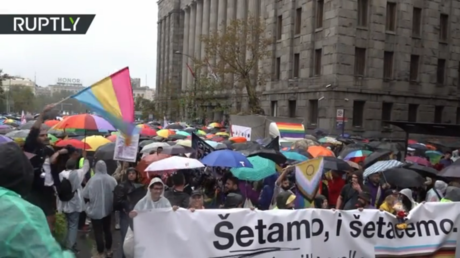 Organizers claim nearly 10,000 people took to the streets of Belgrade

A march in support of LGBTQ rights was held in the Serbian capital on Saturday, after the last-minute lifting of an official ban. Conservative activists attempted to disrupt the event, and clashed with riot police.

Nearly 10,000 participants turned out for the 2022 EuroPride March in Belgrade, according to local media, citing organizers. The parade was part of the broader EuroPride week, featuring events in different European cities.

Right-wing and religious activists as well as football fans tried to prevent the march from going ahead, but a heavy police presence kept them at bay.

The US ambassador to Serbia, Christopher Hill, who attended the parade, took to Twitter congratulating “all of Serbia on a safe, successful #EuroPride2022 that affirms Serbia’s European future.”

Proud to walk with fellow diplomats today in support of diversity, inclusion, and respect for the rights of all citizens. Congratulations to @BelgradePride, @CRDEurope and all of 🇷🇸 on a safe, successful #EuroPride2022 that affirms 🇷🇸‘s European future. pic.twitter.com/Xtq2f0icVi

The European parliament’s special rapporteur for Serbia, Vladimir Bilcik, was among the other foreign dignitaries spotted at the gathering.

However, a huge question mark hung over the march until the last minute, as the Serbian authorities had banned it earlier this month, claiming the police would not be able to adequately protect the participants.

On Friday, Serbia’s Interior Minister Aleksandar Vulin confirmed that the “ban on the march organised by EuroPride 2022 remains in effect,” emphasizing that “no one, and the Ministry of Internal Affairs especially, succumbed to the pressures of the great powers of the West.”

However, the decision drew criticism from Western officials, and on Saturday the event organizers said they had been given the green light by Prime Minister Ana Brnabic, who is openly gay herself.

The prime minister dismissed the other officials’ security concerns, citing several previous LGBTQ events held in Belgrade that had passed “without one single incident.” The organizers, however, had to shorten the original route.

Meanwhile, the leader of one of the country’s right-wing parties has called for Brnabic to be arrested for treason.