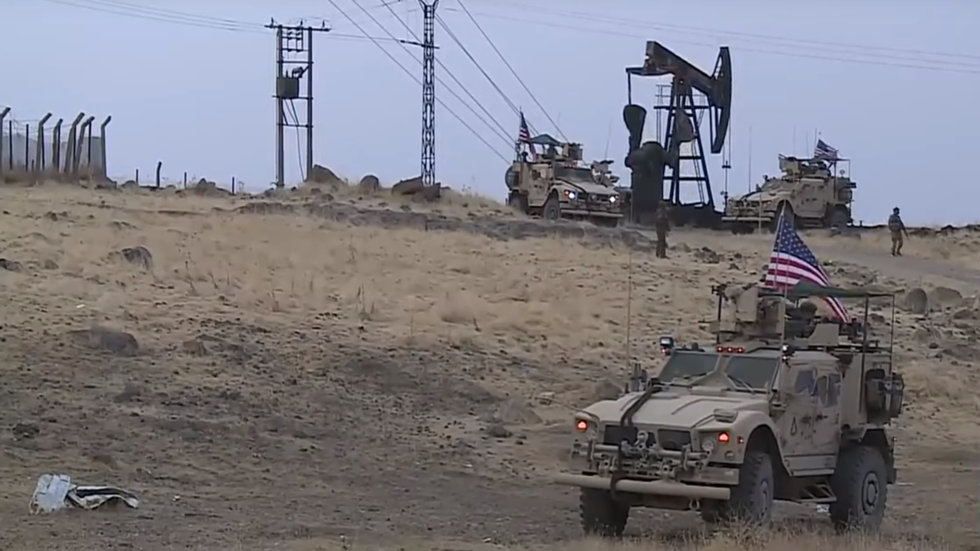 Democratic presidential hopeful Joe Biden, who back in the good old Obama administration days lobbied for the arming of ‘moderate’ rebels in Syria, has slammed Trump for downgrading the US military to an oilfield occupation force.

“Leaving troops behind like [Trump’s] doing now – he says that what he wants to do is we’re going to occupy the oil fields and we’re going to take ‘em…” Biden told the Wall Street Journal. He expressed deep regret that the vacuum, left by the US troop pullback, has disastrously been filled by the legitimate Syrian government, Russia and (probably worst of all) Iran. Oh, and Islamic State terrorists of course.

That’s like a giant 300-foot recruiting poster for ISIS

As if only a terrorist would object to the God-given American right to occupy and loot sovereign nations’ natural resources, Biden did not criticize the policy shift per se, but rather raised doubts if President Trump had any coherent foreign policy at all – and lamented yet another US ‘betrayal’ of its allies.

Back in his prime days in the Obama administration, Biden lobbied for a $500-million Syrian rebel train and equip program – even though he admitted that finding even a single ‘moderate’ enough revolutionary might prove hard, if not impossible, as it was unlikely there was “a Thomas Jefferson hiding behind some rock, or a James Madison beyond one sand dune.”

So when reports of American weapons regularly falling into the hands of IS and US-backed militants joining the ranks of hardcore jihadists finally reached the mainstream media, Biden famously tried to deflect the blame, claiming it wasn’t Washington’s fault that its own allies had been pouring “hundreds of millions of dollars and thousands of tons of weapons into anyone who would fight against Assad.”

After the ‘moderate rebel’ endeavor flopped and turned out a PR disaster, Washington managed to maintain a foothold in northern Syria and capture oil fields in the Deir ez-Zor governorate with the help of its new boots on the ground, the Kurdish militias.

“I like oil! We’re keeping the oil!” Trump proclaimed as he pulled the troops, making it clear that the only reason US maintains a small (yet still illegal) military presence after the pullout was to deny Damascus access to its natural resources. Each month the US smuggles crude worth some $30 million out of Syria, according to Russia’s estimates – which is not only in violation of international law but, ironically, also in breach of its own unilateral sanctions against the war-ravaged state.

Even Syrian President Bashar Assad had to give Trump credit for so openly admitting to represent the interests of American lobbies, in stark contrast with the previous similarly ‘criminal’ Nobel Peace Prize administration that posed as the “defenders of human rights and noble and unique American values.”