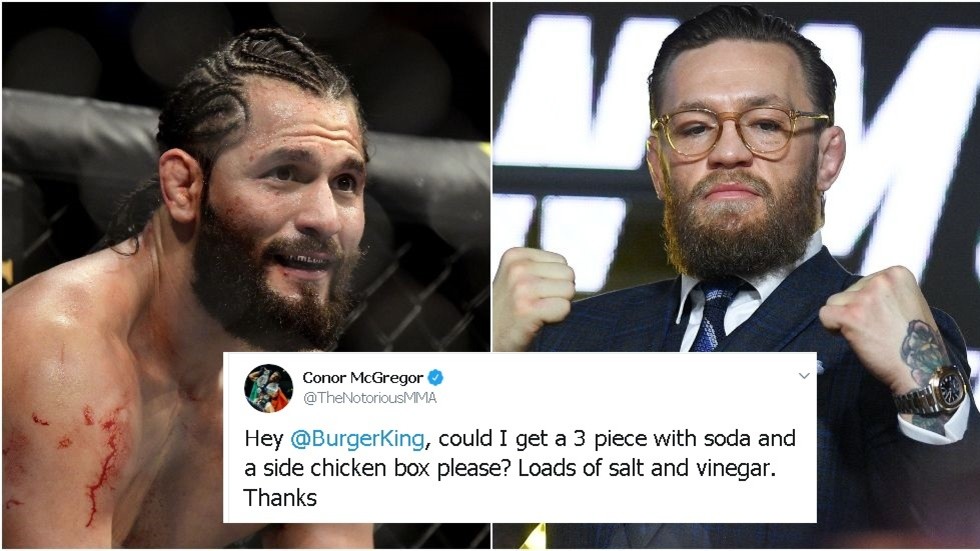 Conor McGregor requested “a three piece with soda” as used Jorge Masvidal’s iconic phrase to aim a dig at his fellow UFC star, after Masvidal warned he would “f*ck up” the Irishman should they ever meet in the octagon.

Masvidal claimed the inaugural UFC ‘BMF’ title in New York on Saturday night, defeating Nate Diaz after a doctor refused to allow the Californian out for the fourth round of the fight due to a gash to his right eye.

After being crowned the UFC’s ‘Baddest Motherf*cker’, Masvidal dismissed the idea that he could face McGregor – a man who has proclaimed to be the rightful owner of the title.

“You know what the f*ck I’ll do to that little dude, I’ll f*ck that little guy up. He’s a f*cking midget!” the 5ft 11in Masvidal said of the 5ft 8in McGregor at the post-fighter presser at Madison Square Garden.

“Dana White, president of this motherf*cking company, said that I’m too much of a man for him. I get it why people want to see him hurt for the stunts he’s been pulling. But he don’t want this sh*t, he’s just talking so he can get his name out there,” Masvidal added.

‘The Notorious’ responded on social media, using the iconic “three piece and a soda” phrase that Masvidal himself coined when he clashed with UFC fighter Leon Edwards backstage in London earlier this year.

“Hey @BurgerKing, could I get a 3 piece with soda and a side chicken box please? Loads of salt and vinegar. Thanks,” McGregor tweeted.

Hey @BurgerKing, could I get a 3 piece with soda and a side chicken box please? Loads of salt and vinegar. Thanks

The Irish former two-weight champ had designs on facing the winner of the Masvidal-Diaz bout, as part of a three-fight comeback plan he announced in Moscow last month.

The first stage of that plan is a return on January 18, supposedly in Las Vegas, with lightweight rival Donald ‘Cowboy’ Cerrone being the most likely opponent.

However, UFC boss Dana White reiterated at the weekend that “literally nothing” had been done to agree the fight – although he admitted that he “liked” the idea of the bout.

The anticlimactic nature of the Masvidal versus Diaz result on Saturday immediately led to calls for a rematch, which Masvidal signalled he was down for.

That could throw a spanner in the works of McGregor’s plans to face ‘Gamebred’, as could the weight difference between the pair.

McGregor famously stepped up to welterweight for his epic double-header against Nate Diaz in 2016, although UFC chief White has previously said that another step up to 170lbs would be too much for McGregor.