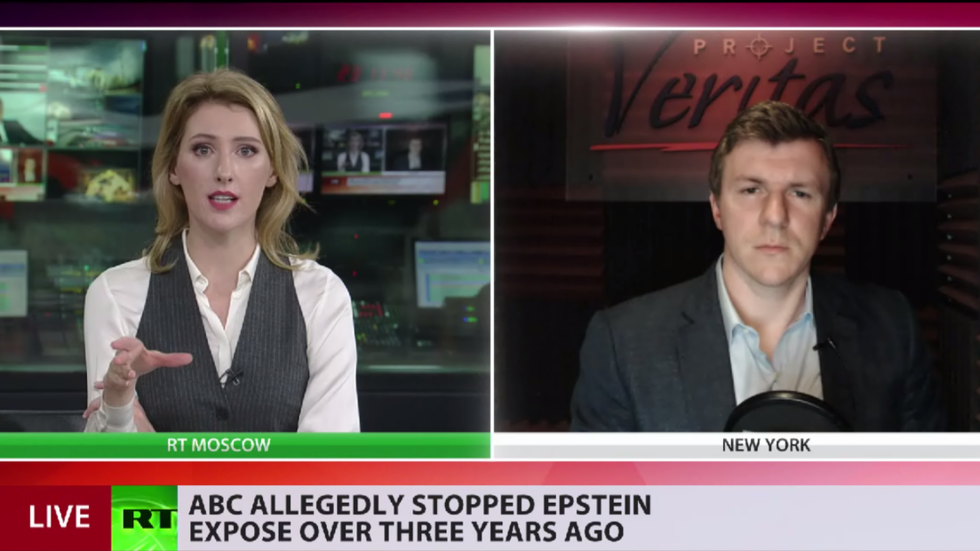 ABC and other mainstream media outlets refused to cover accusations against sex predator Jeffrey Epstein because “a network of people” that includes their executives were implicated, James O’Keefe of Project Veritas told RT.

The Disney-owned network has doubled down on its insistence that anchor Amy Robach’s story on Epstein three years ago lacked “enough corroboration” and thus wasn’t aired. This was after Project Veritas released a “hot mic” video of Robach slamming the decision to quash the story.

The conservative filmmaker told RT on Tuesday that he believes ABC’s refusal to budge from that explanation backs up Robach’s claim that “a network of people” – including the executives running her channel – are “covering up for this” because they are somehow “implicated.”

Robach had interviewed Epstein’s alleged sex slave Virginia Roberts Giuffre and other victims and claimed to have pictures and other proof to back up her story. The never-aired exposé was such a bombshell that it provoked intimidating calls from “the [UK royal] palace, which threatened [ABC] a million different ways,” and Epstein lawyer Alan Dershowitz – and the media establishment, O’Keeffe said, is very susceptible to such threats.

Mainstream media’s decisions to suppress major stories like Epstein or the allegations of sexual assault against Hollywood producer Harvey Weinstein have contributed to a wholesale abandonment of trust in the media by the American people, O’Keeffe continued.

A lot of these people are not trusting the media anymore in this country because the media does not cover the news.

“It’s quite telling that this insider leaked this tape to Project Veritas and not the Washington Post, New York Times, CBS or CNN, because they seem to want to protect the people that were working with Jeffrey Epstein,” he added.

“They’re fine airing the allegations against Brett Kavanaugh, or [President Donald] Trump, or anybody else, but when it comes to Bill Clinton and some of these folks who are mentioned by Amy in this hot mic tape, they say they just didn’t have enough corroboration,” O’Keefe said, recalling that Robach had specifically mentioned that “we had [Bill] Clinton.”

I’m not sure how ABC News defines corroboration when it comes to credible witnesses talking about sexual assault.

Project Veritas, which specializes in undercover videos from inside liberally-minded organizations, has recently turned its eye on the media establishment, including CNN and now ABC.

Epstein, a financier with a reputation for having many famous and powerful friends – and a Caribbean island or two where he entertained them with underage girls – was found dead in his jail cell in August. His death was officially ruled a suicide, but a subsequent forensic examination cast doubt on the story that he killed himself.