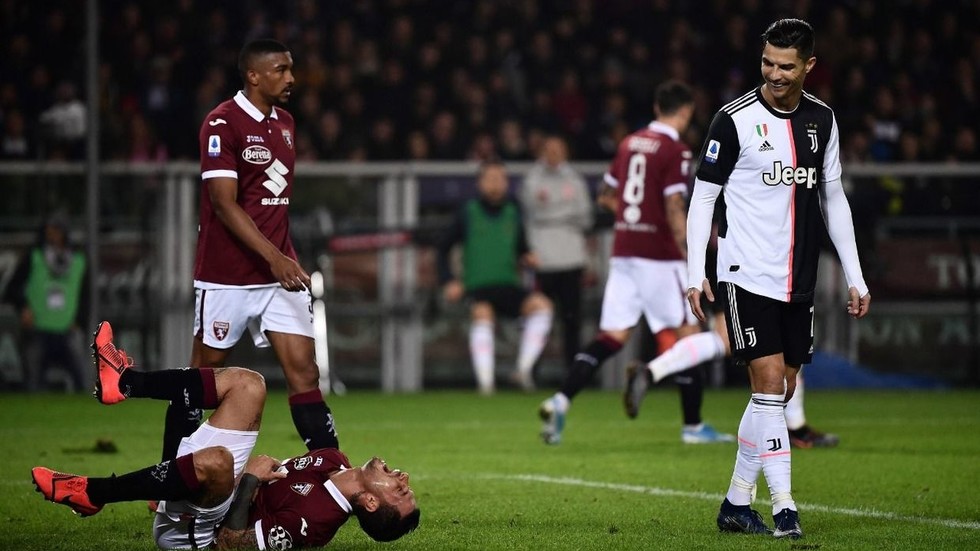 Cristiano Ronaldo had little time for Armando Izzo’s playacting after the Torino defender made what appeared to be an attempt to get the Juventus forward sent off during their Serie A derby clash.

The pair came together in the Torino box during Juve’s 1-0 win on Saturday, with Ronaldo brushing his elbow against Izzo.

That was the cue for the defender to go down in apparent agony, writhing around on the ground as Ronaldo looked on disdainfully.

Gotta say, I have NO idea how #Izzo managed to survive this vicious nudge by #Ronaldo. I mean, look at the pain on his face as he goes down. He must be some kind of superhuman to actually be able to get back up. #Juventus #ToroJuve pic.twitter.com/atgaaCBIoq

Izzo, 27, eventually got to his feet and gestured to the referee to issue Ronaldo with a card over the incident, although the official unsurprisingly declined.

The incident spawned a meme frenzy on social media, where many praised Izzo’s acting skills.

and the oscar goes to: Armando Izzo, Torino-Juventus

And now Armando Izzo has completely embarrassed himself trying to get Ronaldo sent off.
What a joke?! How can players decide to flip and act when they know VAR will review their actions and see they’re lying!?

Maurizio Sarri’s Juve team were 1-0 winners at the Olimpico di Torino thanks to a second-half goal from Dutch defender Matthijs de Ligt which sent his team back to the top of the table, one point ahead of Inter Milan.