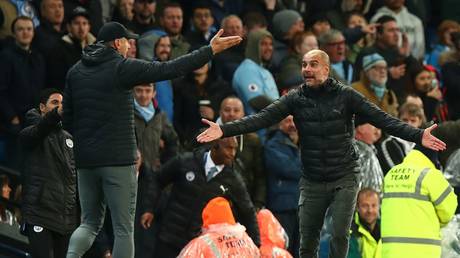 Manchester City boss Pep Guardiola savored a late comeback win for his team in the Premier League against Southampton on Saturday, trolling the Saints’ bench after what he felt were time-wasting tactics.

After suffering a record 9-0 hammering at the hands of Leicester in their last Premier League outing, Southampton incredibly found themselves on course for victory at reigning champions City when James Ward-Prowse put them ahead at the Etihad in the 13th minute.

Man City poured forward in increasing desperation in the second half, and eventually found the equalizer through Sergio Aguero in the 70th minute before Kyle Walker’s injury-time volley broke Saints hearts and handed the home team a 2-1 win.

With his team finally ahead, City boss Guardiola vented at what he felt were time-wasting ploys from the Southampton bench when their team had been leading.

The Spaniard was seen sarcastically handing the ball back to the Southampton bench after a late throw-in, mocking the Saints staff for what he believed was slowness to return the ball when they had been in front during the match.

Southampton Assistant Manager holds onto the ball at 0-1 in the 60th minute.

Pep Guardiola gets the ball and offers it to the assistant manager while City are winning 2-1.

Elsewhere on a remarkable day’s action in the English top flight, City’s fellow title challengers Liverpool left it even later to come from behind in their game against Aston Villa.

Villa had taken the lead through Trezeguet in the first half before Andy Robertson headed Jurgen Klopp’s team level on 87 minutes and Sadio Mane then scored the winner four minutes into injury time.

Incredible late drama at Villa Park as Robertson and Mane both score with headers in the last 10 minutes of the match#AVLLIV pic.twitter.com/jhzxrZTZAR