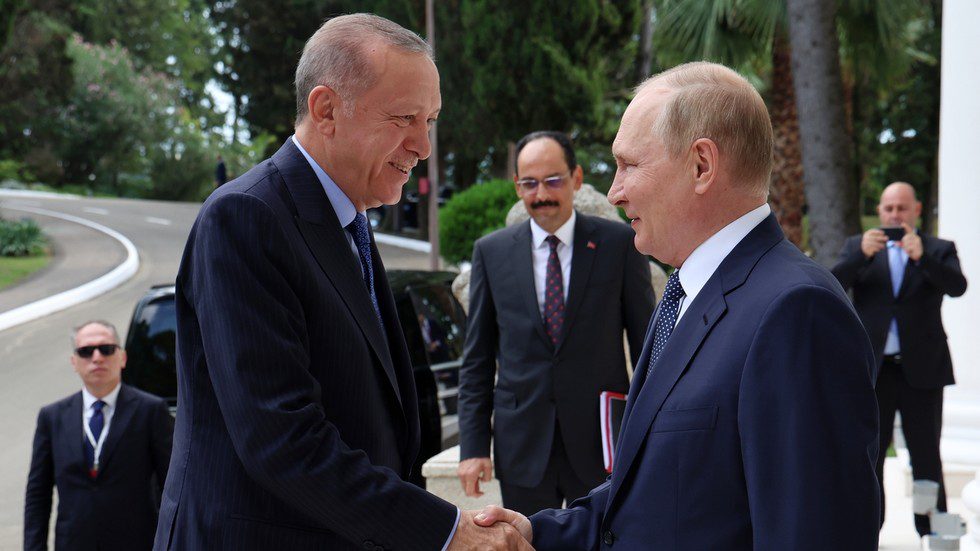 The Istanbul grain deal should be fully adhered to

Both Putin and Erdogan commended the roles played by each other’s countries in reaching a deal on the export of Ukrainian agricultural goods in July. Turkey and the UN helped Moscow and Kiev to negotiate an agreement to allow maritime traffic from Black Sea ports to resume after it was halted amid the Russian military operation in Ukraine.

The two leaders agreed that the deal should be “fully implemented” in both “spirit and letter,” a joint statement adopted by Putin and Erdogan said. The unimpeded export of Russia’s grain, as well as fertilizers and the raw materials to produce them, should also be facilitated.

The UN has specifically promised to work towards removing obstacles to Russian grain and fertilizer exports. On Friday, Moscow said that restrictions imposed by the US and its allies were still disrupting its grain harvests and could exacerbate the global food crisis.

The two presidents discussed a broad bilateral agenda as they pledged to further cooperate in the fields of trade, transport, agriculture, finance, tourism and construction. Moscow and Ankara agreed to “meet halfway” when it comes to each side’s needs in the trade and energy sectors, the joint statement said.

Putin praised the fact that trade volumes between the two nations grew by 57% last year and doubled in the first five months of 2022. He also noted that Russia supplies Turkey with all types of energy resources, including oil, gas and coal in a stable and predictable manner, “without any interruptions.”

Russia and Turkey also agreed on a new payment mechanism that will entail Ankara paying for a part of the Russian gas it buys in rubles, Russian Deputy Prime Minister Aleksandr Novak told journalists after the meeting. “This is a really new stage; new opportunities, including for further development of our financial relations,” he said.

Erdogan welcomed Russia’s role in building Turkey’s first nuclear power plant, Akkuyu, adding that the project is “very important” for the nation’s economy and is expected to cover 10% of Turkey’s energy needs. The plant, which is being built according to a Russian design, is expected to come into operation in 2023.

Regional stability and the fight against terrorism

The Turkish president also said that Russia plays a “special role” on the international stage and particularly in the fight against terrorism. “Solidarity” between Moscow and Ankara is key for safeguarding peace and stability in the Middle East, he added.

In the joint statement, Putin and Erdogan reaffirmed their commitment to the political process in Syria. The two sides agreed it was important to maintain the “political unity and territorial integrity” of this Middle Eastern nation, the document said. Moscow and Ankara confirmed their readiness to “act together in full coordination” to fight any terrorist organizations.

The presidents also discussed the situation in Libya, agreeing that Libyans themselves should play the key role in the political developments of their country. Russia and Turkey said they supported the “sovereignty, territorial integrity and political unity” of Libya.

The two leaders also agreed to further develop bilateral relations on the basis of “mutual respect” and in full accordance with each other’s international obligations despite “the current regional and global challenges.”