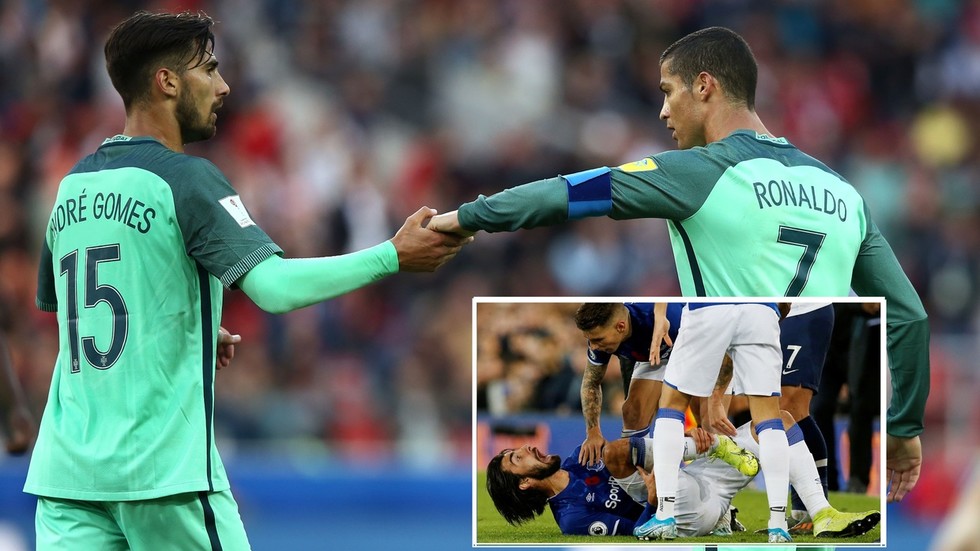 Portugal captain Cristiano Ronaldo has been among those to offer support to countryman Andre Gomes after the midfielder suffered a horrific ankle injury while playing for club team Everton at the weekend.

Gomes fractured and dislocated his right ankle at Goodison Park on Sunday, catching his boot in the turf following an initial challenge from Tottenham’s Son Heung-min and a subsequent collision with Spurs defender Serge Aurier.

Gomes howled in agony amid sickening scenes as Son was left in tears over his role in the incident, while Everton teammates desperately tried to comfort the Portuguese star.

Everton confirmed on Monday that Gomes had undergone surgery and was expected to make “a full recovery,” while Portugal captain Ronaldo was among those to offer his support in a touching message on Instagram.

“Fast improvements @ aftgomes21 will come back even stronger – big hug,” the Juventus forward wrote, sharing a picture of the pair on international duty.

Gomes later shared the message on his own Instagram account, along with the many others he has received from fans and fellow professionals.

Tottenham are reportedly willing to offer psychological support to Son after he was left distraught at the scenes at Goodison Park.

The South Korean was sent off after a VAR review for “endangering the safety of an opponent,” although Everton boss Marco Silva and Spurs chief Mauricio Pochettino both agreed there was no malice in the challenge that led to Gomes’ ankle snapping an such an ugly angle.

Everton’s Turkish forward Cenk Tosun – who scored a late equalizer in the 1-1 draw – later described how he had desperately tried to console the stricken Gomes.

“Everybody is so sad inside. Some players, they nearly cried,” Tosun said afterwards.

“Andre was in shock. His eyes were open so big. He was crying, shouting and screaming. I just tried to hold him and speak to him. I tried to tell him to stay calm. We couldn’t understand him. He was the one who had got the injury.”

Gomes, 26, will likely miss the rest of the season as he recovers from the injury. The Portugal star joined Everton on loan from Barcelona last season, before the move was made permanent for £22 million in the summer.