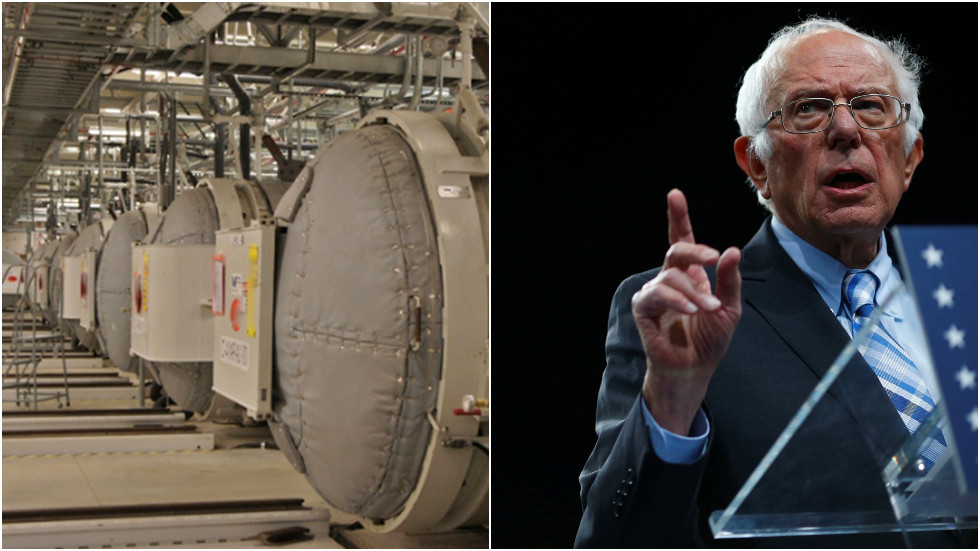 Democratic presidential contender Bernie Sanders urged for a return to the nuclear accord with Iran in the wake of Tehran’s latest step away from the deal, as Republican hawks insisted on further escalation in response.

Making good on an announcement earlier this week, Iran has pushed its uranium enrichment capabilities further beyond the caps set out in the nuclear accord it had signed with world powers in 2015. Iran has scaled back its commitments to the deal after US President Donald Trump unilaterally withdrew from it last year.

Though Washington is largely preoccupied with an impeachment frenzy and the fallout from recent state elections, socialist stalwart Bernie Sanders (I-Vermont) was one of the few 2020 candidates to weigh in on the Iranian move, calling the decision “concerning,” but nonetheless arguing for a return to the nuclear deal, known formally as the JCPOA.

“We had a deal in place that capped Iran’s nuclear program, which Trump recklessly violated,” Sanders said. “We should rejoin the JCPOA immediately and talk to Iran about other regional issues.”

Iran's resumption of work at Fordow is a concerning step. We had a deal in place that capped Iran’s nuclear program, which Trump recklessly violated. We should rejoin the JCPOA immediately and talk to Iran about other regional issues. https://t.co/nlMIqEjt67

Democratic frontrunner Joe Biden has yet to comment on the decision, but the former VP has taken a similar stance on the nuclear deal previously, stating it made “no sense at all” to walk away from it.

On the other side of the aisle, Representative Liz Cheney (R-Wyoming) and Senators Ted Cruz (R-Texas) and Lindsey Graham (R-South Carolina) responded with a blustery statement demanding harsher action against Iran, namely the revocation of all sanctions waivers on the country’s nuclear energy program.

Reports that Iran will begin injecting uranium gas into centrifuges confirm what we’ve long known: Iran has been exploiting the civil-nuclear waivers from the catastrophic Obama-era nuclear deal. Read my statement with @SenTedCruz and @GrahamBlog here: https://t.co/IDv1jsNdro

Among the remaining waivers is a measure allowing foreign scientists to help Iran redesign the reactor at Arak. Under the JCPOA, Iran agreed to redesign the Arak reactor to operate at a lower power capacity and to use alternative fuel, which yields less plutonium as a byproduct. With waivers on the reactor project revoked, however, Iran may return to the original design, scrapping a major concession in the nuclear accord and giving the hawks in Washington another excuse for escalation.

Neither the United States, nor the world, can allow the Ayatollah and its murderous regime to acquire a nuclear capability. I hope and expect that President Trump will put all options on the table when it comes to stopping an Iranian nuclear breakout.

Across the Atlantic, the European signatories to the JCPOA largely reacted with concern, with German Foreign Minister Heiko Maas warning this week that Iran would “endanger the deal in its entirety” with the enrichment move, while his UK counterpart Dominic Raab called the step a “risk to … national security.”

French President Emmanuel Macron also took notice, saying that Iran had decided “in an explicit and blunt manner to leave the JCPOA,” but added that Washington’s “shouty unilateralism” was much to blame for the spat over the deal. Dialogue between Iran and the US was needed for a “return to normal,” Macron said.

Tensions have soared between Iran and the US since Trump scrapped Washington’s end of the nuclear accord last year and reimposed a raft of crippling sanctions, vowing to slash Iran’s oil exports to zero in a “maximum pressure campaign.”

Tehran has maintained the same position despite the sanctions, however, insisting that it will continue to reduce its commitments to the JCPOA until Europe defies Washington’s ongoing sanctions crackdown.