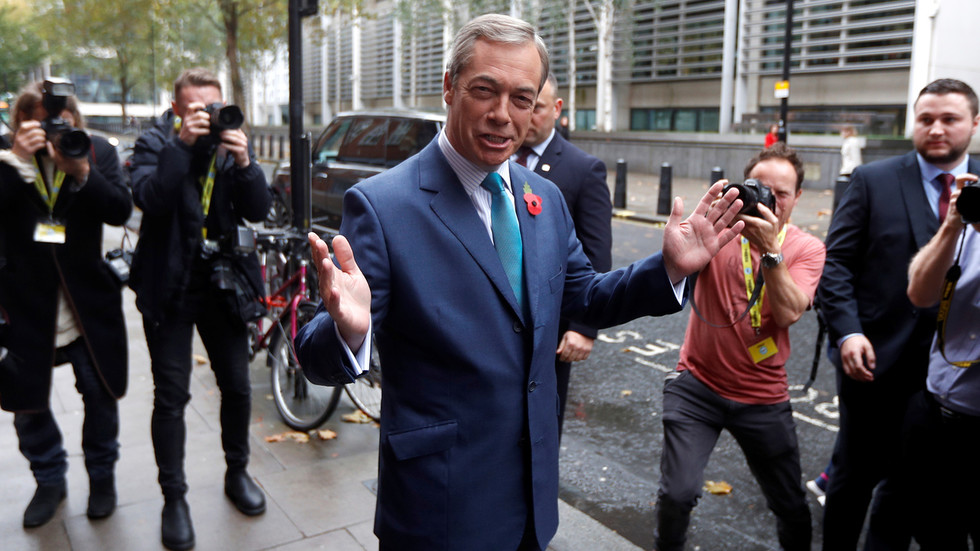 Describing the pluses of a no-deal Brexit, Nigel Farage has invoked his argument of choice – leaving the EU without any agreement will make “everything,” women’s underwear in particular, cheaper, he said.

Speaking at the launch of his Brexit party’s general election campaign in Westminster on Friday, Farage yet again called upon PM Boris Johnson to form a ‘Leave alliance’ to become an “unstoppable force” in the polls.

Creating such an alliance would involve Johnson agreeing to ditch his Brexit deal, as well as the Brexit party staying away from Tory seats, with the latter agreeing not to target Labour-held marginals that Farage is seeking to take over.When asked by reporters how exactly he was planning to win over Labour supporters, he said they will be attracted by the greatly reduced prices of “everything from underwear to shoes to food” – the potential outcome of his no-deal Brexit strategy.

“Cheaper food, cheaper bras, cheaper shoes. Cheaper everything,” Farage stated. “12,500 everyday household goods that we buy, everything from underwear to shoes to food, that are tariffed because of the [EU’s] common external tariff and our membership of the European Union.”

Farage’s quite bizarre pick of goods that will supposedly become cheaper raised a few eyebrows, yet, in fact, the prominent Brexiteer has been repeatedly singling out bras while painting the benefits of a hard Brexit. He mentioned them at least twice back in 2018 in the same context. It’s unclear whether this is a trick to win over female voters or the politician simply finds the list entertaining enough to repeat over and over again.