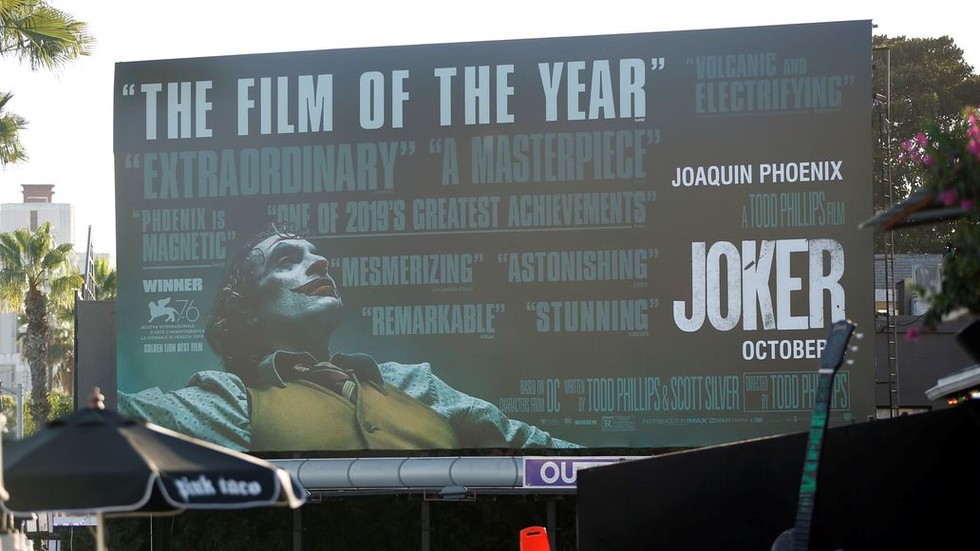 Seen as a potential validation for violent glory seekers, the ‘Joker’ movie turns out to be not an incitement for violence but a judgement on the modern political system’s flaws, philosopher Slavoj Zizek says.

The much acclaimed Todd Phillips movie starring Joaquin Phoenix has received its fair share of criticism from almost everyone, from the woke community to the US Army, who all believed it could prompt some “evil” people to commit acts of violence.

Yet, the film’s critics have apparently overlooked the underlying message of the movie, Zizek, the senior researcher at the Institute for Sociology and Philosophy at the University of Ljubljana, told RT, adding that it is not about some mentally-challenged person, but about the “hopelessness” of our “best ever” political order itself, which many still simply refuse to accept.

We should congratulate Hollywood and the viewers on two things: that such a film that, let’s face it, gives a very dark image of highly developed capitalism, a nightmarish image which led some critics to designate it a ‘social horror film’, came out. Usually, we have social films, which depict social problems, and then we have horror films. To bring these two genres together, it is only possible when many phenomena in our ordinary social life become phenomena which belong to horror films.

It is even more interesting to see how reactions to the film provide a whole specter of political cohesions in the US. On the one hand, conservatives were afraid that this film would incite violence. It was an absurd claim. No violence was triggered by this film. On the contrary, the film depicts violence and awakens you to the danger of violence.

As it is always the case, some politically correct people feared that the film used racist clichés and celebrates violence. It is also unfair. One of the most interesting positions was that of Michael Moore, a leftist documentarist, who celebrated the film as an honest depiction of reality of those poor, excluded and not covered by healthcare in the US.

His idea is that the film explains how figures like Joker can arise. It is a critical portrayal of reality in the US, which can give birth to people like Joker. I agree with him but I would also like to go a bit further.

I think what is important is that the figure of Joker in the end, when he identifies with his mask, is a figure of extreme nihilism, self-destructive violence and a crazy laughter at others’ despair. There is not positive political project.

The way we should read ‘Joker’ is that it very wisely abstains from providing a positive image. A leftist critique of ‘Joker’ could have been: “Yes, it is a good portrayal of reality in the poor slums of the US but where is the positive force? Where are democratic socialists, where are ordinary people organizing themselves?” In this case, it would have been a totally different and a pretty boring film.

The logic of this film is that it leaves it to the spectators to do this. The movie shows sad social reality and a deadlock of the nihilist reaction. In the end, Joker is not free. He is only free in a sense of arriving at a point of total nihilism.

It is up to us to decide what we should do.

I designated the figure of Joker in a kind of Kazimir Malevich, the Russian avangardist, position when he did this famous painting of the Black Square. It is a kind of minimal protest – a reduction to nothing. Joker simply mocks every authority. It is destructive but lacks a positive project. We have to go through this path of despair.

It is not enough to play the game of those in power. That is the message of ‘Joker’. The fact that they could be charitable like Bruce Wayne’s father in this latest movie is just a part of the game. You have to get rid of all these liberal stupidities that obfuscate the despair of the situation.

Yet, it is not the final step but a zero level of clearing the table to open up the space for something new. This is how I read the film. It is not a final decadent vision. We have to go through this hell. Now, it is up to us to go further.

The danger of explaining just the backstory is to give a kind of a rational explanation that we should understand the figure of Joker. But Joker does not need this. Joker is a creative person in some sense. The crucial moment in the film for his subjective change is when he says: “I used to think my life was a tragedy. But now I realize, it’s a comedy.”

Comedy means for me that at that point he accepts himself in all his despair as a comical figure and gets rid of the last constraints of the old world. That is what he does for us. He is not a figure to imitate. It is wrong to think that what we see towards the end of the film – Joker celebrated by others – is the beginning of some new emancipatory movement. No, it is an ultimate deadlock of the existing system; a society bent on its self-destruction.

The elegance of the film is that it leaves the next step of building a positive alternative to it to us. It is a dark nihilist image meant to awaken us.

Are we ready to face reality?

The lesson of ‘Joker’ is that a more radical change is needed; that this is not enough. And that is what all those democratic leftists are not aware of. This dissatisfaction that grows up today is a serious one. The system cannot deal with it with gradual reforms, more tolerance or better healthcare.

These are signs of the need for more radical change.

The true problem is whether we are ready to really experience the hopelessness of our situation. As Joker himself said at a certain moment in the film: “I laugh because I have nothing to lose, I am nobody.”

There is also a clever name game here. Joker’s real family name is Fleck. In German, fleck is a stain, a meaningless stain. It is like anamorphosis. We need to take a different look to see a new perspective.

I do not trust all those leftist critics who are afraid of its potential. As Moore put it very nicely, you are afraid of violence here, not of real violence in our daily life. To be shocked by violence depicted in the film is just an escape from real violence.