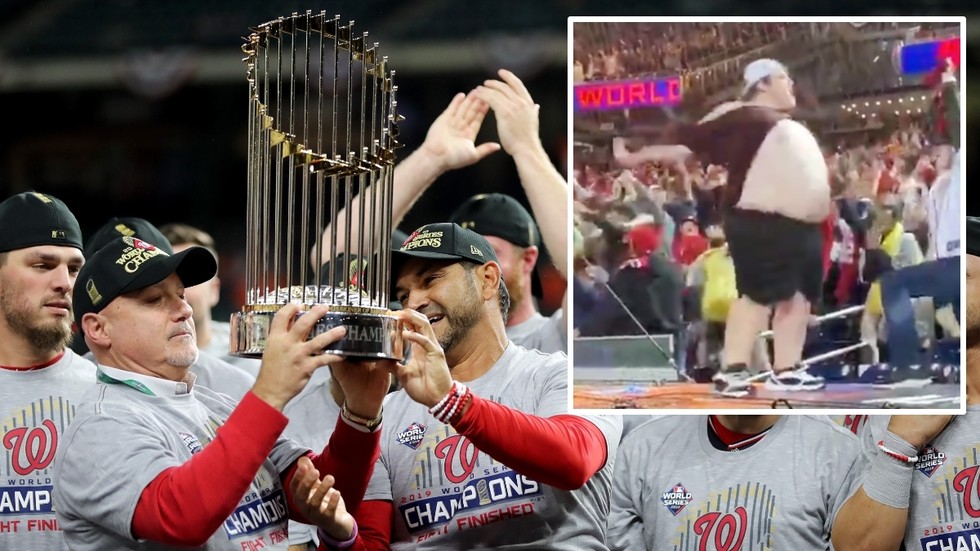 Baseball fans of all shapes and sizes were sent into a frenzy late on Wednesday when the Washington Nationals clinched their first MLB World Series against the Houston Astros, with one fan in particular getting quite carried away.

The Nationals won the crucial seventh game of their series in Texas by a score of 6-2 to take custody of the World Series for the very first time since their formation in 1969 – and as you might expect of sports fans witnessing their team make history, some rather exuberant celebrations followed.

Despite the the crucial game in the series taking place nearly 1,500 miles away in Texas, thousands of Washington fans braved poor weather and packed into Nationals Park to watch the game on the big screen and after victory was secured the fans in attendance erupted in celebration.

It was all too much for one supporter who immediately ripped his t-shirt from his body and performed a ‘stage dive’ across the slippery surface above the dugout, before briefly considering (and ultimately aborting) an attempt at performing ‘The Worm’.

I would tag Gerrit Cole…but he blocked me 🤷🏻‍♀️ pic.twitter.com/auQVGgFTMV

This comes just days after a woman was issued with an indefinite ban from attending any Major League Baseball stadium after she was found to have ‘flashed’ Astros player Gerrit Cole.

One person who presumably didn’t enjoy the Nationals’ victory was a man who lives just two miles from the baseball club’s stadium, Donald Trump. The deeply divisive US president was booed by fans, who also chanted ‘Lock Him Up!’, when he attended the fifth game in the series earlier this week.