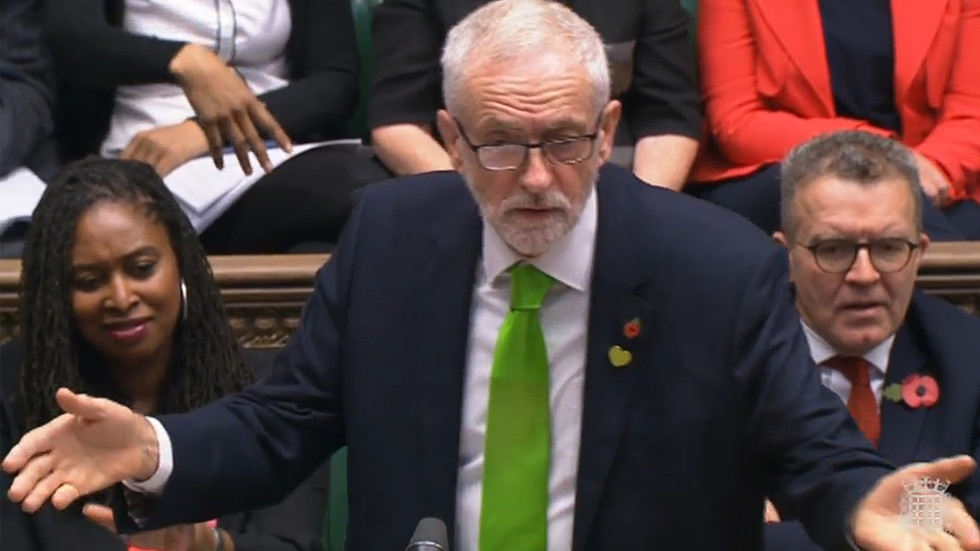 Tory MPs were given a reprimand by former UK PM Theresa May in parliament after they laughed at Jeremy Corbyn’s green tie – worn in honor of victims of the Grenfell Tower fire, during a debate following a report into the tragedy.

The Labour leader was in the middle of paying tribute to the 72 people that lost their lives in the tower inferno in June 2017 when the Conservative backbench MPs in the House of Commons began to mock his green tie.

The reaction could have only been taken as ignorance or insensitivity, especially in light of the fact that the victims’ families were looking on at proceedings from the public gallery.

Corbyn responded to the hostile jeers by claiming the lawmakers were simply “jealous” of his tie. The Grenfell campaign group set up to fight for justice for the victims adopted the color green because the word ‘grenfell’ is an old term meaning ‘green field.’

The scenes were too much, even for May, who was the UK’s Tory premier at the time of the tragedy and was criticised for showing an apparent lack of sympathy towards the Grenfell residents in the immediate aftermath of the fire. The former prime minister was heard hissing at her colleagues, saying: “It’s for Grenfell.”

Many Tory MP’s are pointing and laughing at @jeremycorbyn’s bright green tie today at #PMQ’s today. It’s a tribute to those who suffered and died in the Grenfell tragedy. You can’t buy class #GrenfellNeverAgain

Theresa May giving dagger eyes and acid words to Tory backbenchers jeering Jeremy Corbyn for the colour of his green tie. “It’s about Grenfell”, she says. They stopped their chortling pretty quickly. Amazing lack of awareness. #PMQs

Tory MPs laughing at Corbyn’s bright green Grenfell tie are an out of touch elite inviting a kick in the ballots. Didn’t know why he wore it? Well they didn’t care about ignored poor people housed in a council firetrap in the richest part of the country

The first part of the inquiry, which deals solely with events on the night of the tower fire, was published on Wednesday. It’s highly critical of senior members of the London Fire Brigade.

Retired judge Sir Martin Moore-Bick, who headed the inquiry, has concluded that, once it was apparent that the fire was out of control, the London Fire Brigade should have revoked its ‘stay-put’ policy. The report suggests this should have happened between 1:30am and 1:50am, less than an hour after the fire started.