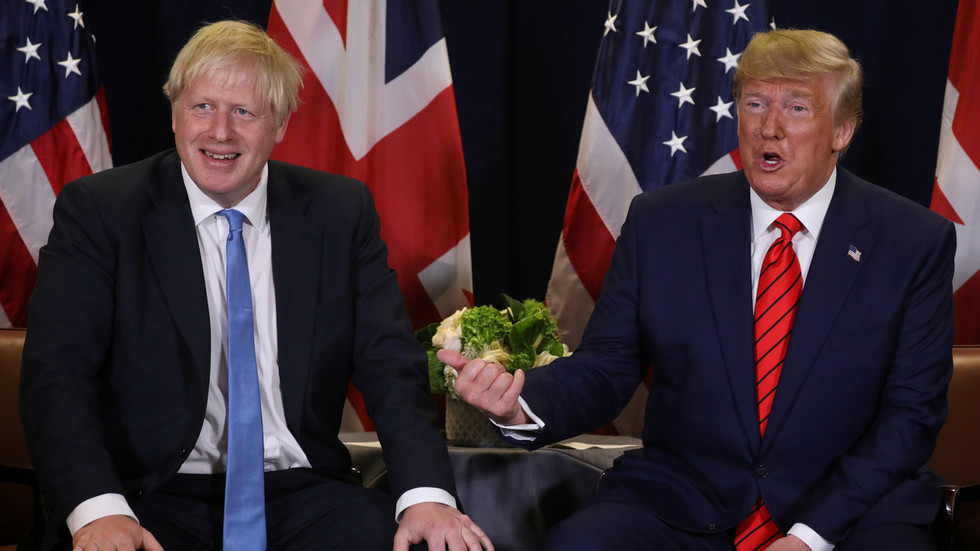 US President Donald Trump has waded into the protracted Brexit process, claiming that with the withdrawal agreement at hand Washington “can’t make a trade deal” with Britain. He also picked a side in the upcoming general election.

Speaking to Brexit Party leader Nigel Farage on LBC radio, Trump said that certain elements of the Brexit accord as it stands are problematic for a trade deal between the two countries.

“To be honest with you, this deal, under certain aspects of the deal, you can’t do it. You can’t trade. We can’t make a trade deal with the UK,” he said. He added that EU officials were “very tough people to deal with.”

Trump called the situation “completely ridiculous” and insisted that the US wants to “do trade” with the UK and that trade between the two “could be four-to-five times higher.”

The US president also took time to criticize Jeremy Corbyn, saying that he was sure the Labour leader was a “lovely man” but he is “of a different persuasion, to put it mildly.” Trump said Corbyn would be “so bad” for Britain and take the country “into such bad places.”

Corbyn had previously claimed that UK Prime Minister Boris Johnson’s planned trade deal with Trump could give American companies access to Britain’s National Health Service (NHS), allowing them to drive up drug prices. Trump assured Farage that the US “wouldn’t even be involved” in that and that the America was trying to sort out its own health service problems.

Johnson, on the other hand, is “fantastic” and “the exact right guy for the times,” Trump said.

Corbyn hit back at Trump on Twitter, saying that the US leader was “trying to interfere in Britain’s election to get his friend Boris Johnson elected.” Yet, Trump’s comment, that a trade deal with the UK may not be possible under the current Brexit arrangement, is unlikely to be helpful to Johnson during the election campaign.

Donald Trump is trying to interfere in Britain’s election to get his friend Boris Johnson elected.

It was Trump who said in June the NHS is “on the table”. And he knows if Labour wins US corporations won’t get their hands on it.

Our NHS is not for sale.pic.twitter.com/AUhht3pCgL