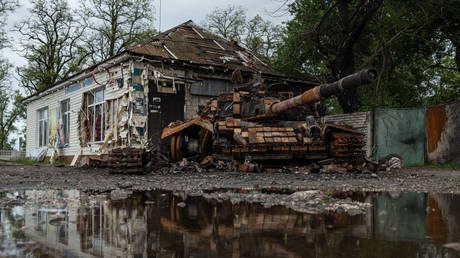 Ukraine will continue fighting against Russia even if it has no weapons whatsoever, so the West should speed up its shipments of arms to Ukraine or be responsible for the deaths of its troops, Foreign Minister Dmitry Kuleba said to German media on Sunday.

“If we don’t get weapons, fine. Then we will fight with shovels. But we will keep defending ourselves because this is a war for our existence,” Kuleba was quoted as saying in an interview with the public broadcaster ARD.

“The sooner we get the weapons, the sooner they are sent, the more good they will do us. If they come late, we will still thank you, but then there will be a lot of waste, and many people will have died by then,” he added.

He made the remarks during a panel discussion with political talk show host Anne Will. The list of guests on the show also included the President of the European Commission Ursula von der Leyen and several German politicians and political experts.

Kuleba said that Russian artillery outgunned Ukraine’s in Donbass 15 to 1, echoing statements that several senior Ukrainian officials have made lately. Kiev cannot win with such an imbalance of power, the foreign minister said.

Western politicians, who believe Kiev should make concessions to Russia and agree to settle the conflict with a peace agreement due to the dire situation on the battlefield, are wrong, Kuleba claimed.

Ukraine was left with some of the largest military stockpiles among former Soviet republics when the USSR dissolved. Now it says it’s lost up to half of its heavy weapons fighting against Russia and allied forces in the east.

Kiev has been pleading for the West to deliver artillery guns, tanks and fighter jets, but have received just a fraction of what they asked for. Ukraine’s allies say they are concerned that Moscow could perceive delivery of weapons as a serious escalation, and Moscow might consider the suppliers as part of the hostilities, Western officials claim.

Moscow says that any military aid given to Ukraine escalates and prolongs the conflict and accused its opponents of waging “a war to the last Ukrainian” against Russia.

Russia attacked the neighboring state in late February, following Ukraine’s failure to implement the terms of the Minsk agreements, first signed in 2014, and Moscow’s eventual recognition of the Donbass republics of Donetsk and Lugansk. The German- and French-brokered protocols were designed to give the breakaway regions special status within the Ukrainian state.