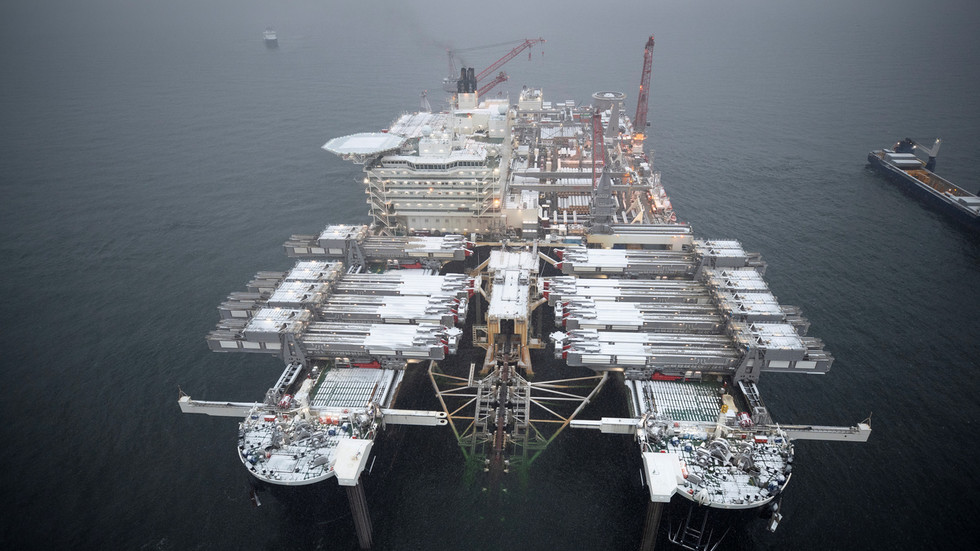 As the Nord Stream 2 pipeline looms closer to completion, its panicked critics claim it will harm Ukraine and increase the EU’s energy dependence on Russia – which are, in fact, mutually exclusive arguments.

After years of delays, on Wednesday Denmark finally gave the approval for building a section of the pipeline inside its exclusive economic zone off the shore of Bornholm.  With the receiving terminal in Germany well underway, this paves the way for the pipeline’s completion by next year, only slightly behind schedule.

“This is a geopolitical issue, this strengthens Russia and weakens Europe,” Ukrainian President Volodymyr Zelensky said in a press conference with NATO Secretary General Jens Stoltenberg in Kiev on Thursday.

Not quite. The pipeline strengthens Russia’s economic position – while it’s Ukraine, not the EU, that ends up weakened politically.

Kiev, Washington, Warsaw and the Baltic States have tried just about everything to halt Nord Stream 2’s construction, citing a variety of arguments. A perennial favorite is that the pipeline would increase Europe’s dependency on Russian gas, while also depriving Ukraine of something like $3 billion in transit fees.

The trouble with these two arguments is that they are mutually contradictory. If the EU were to forswear Russian gas entirely – and replace it, say, with US liquefied natural gas (LNG), aka “molecules of freedom” – Ukraine would lose the transit fees anyway. Not that this is even remotely possible, because the US does not have the capacity to make up for 200 billion cubic meters a year coming in from Russia. Even if it could, it would be at the price point the Europeans could not afford.

Secondly, Russia currently pumps about 87 billion cubic meters of gas through Ukraine every year. Nord Stream 2 will be able to carry only 55 billion, meaning that shutting off the valve to Kiev entirely would actually reduce Moscow’s gas exports. The only way Europe’s “dependency” would increase is if the pipelines through Ukraine continue to run at full capacity – which would mean Kiev would collect transit fees anyway.

Secondly, although Russia gradually reduces the amount of gas it pumps through Ukraine, it still accounted for about 87 billion cubic meters in 2018. That’s in addition to about 55 billion cubic meters that are pumped on average through Nord Stream pipeline. While Nord Stream 2 will be able to add another 55 billion, shutting off the valve to Kiev entirely would still reduce Moscow’s gas exports. The only way Europe’s “dependency” would increase is if the pipelines through Ukraine continue to run at full capacity – which would mean Kiev would collect transit fees anyway.

Admittedly, those fees might have to be reduced somewhat, as Ukraine would lose its stranglehold on Russian gas exports – which is the actual complaint of Kiev and Washington.

Simply put, Russia’s ability to bypass Ukraine if needed greatly diminishes its geopolitical use to Washington – and after the US spent billions on installing and supporting client regimes in Kiev not once, but twice in ten years.

Back in 2009, the “Orange Revolution” government in Kiev diverted EU-bound Russian gas to its own use, after Gazprom slashed deliveries due to delinquency. This resulted in a total shut-down of gas deliveries in the middle of January, during a cold snap no less. Western media uniformly blamed Russia for the situation. This standoff was the impetus for the construction of both Nord Streams and what would become the ‘Turkish Stream.’

The January 2009 gas crisis was only resolved when Kiev accepted a 10-year compromise deal. That contract is set to expire at the end of 2019, and negotiations to extend it have not made much progress – creating the prospect of a freezing Christmas in much of Europe, and making Nord Stream 2 look that much more attractive.

Time is running out before Russia completes the Nord Stream 2 project, further extending its malign economic influence over the NATO alliance. The Senate must pass the Protecting Europe's Energy Security Act immediately. https://t.co/uZBHFpJ8Q7

The US Congress has been threatening sanctions against anyone involved in the construction of both Nord Stream 2 and Turkish Stream, but has not followed through on the threats yet. At this point, it is too late to stop the pipelines’ completion – and the resulting loss of strategic leverage – but that does not mean Washington is above doing something, out of sheer spite and frustration.

One thing should be clear, though: it will have nothing to do with the feigned concerns for the welfare and comfort of Europeans.