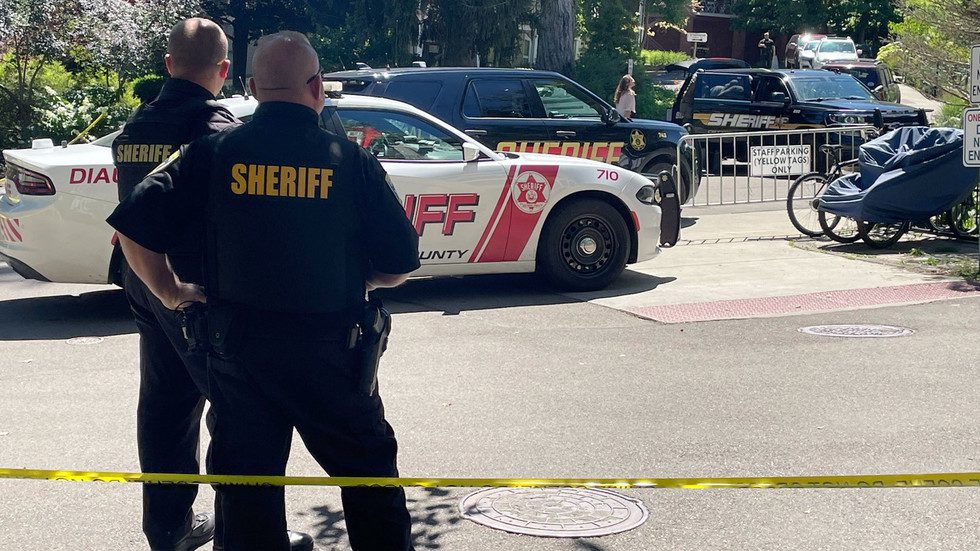 Amid Western condemnation, conservative Iranian outlets called the author “Satan” and an “apostate”

Western authors and officials have strongly condemned the attack on the Indian-born British-American novelist Salman Rushdie, who was stabbed in New York state on Friday. Iranian media and officials, however, reacted by recalling the reasons that prompted the Islamic Republic’s former leader, Ayatollah Khomeini, to issue a religious edict calling for the writer’s death back in 1989.

French President Emmanuel blasted the author’s stabbing as a “cowardly attack by the forces of hatred and barbarism,” adding that the “fight against obscurantism” that Rushdie was engaged in is “universal.”

Outgoing British Prime Minister Boris Johnson said he was “appalled” by the incident, adding that the author of ‘Satanic Verses’ was “exercising a right we should never cease to defend.” The White House national security advisor, Jake Sullivan, also called the attack on Rushdie “appalling” while thanking the first responders for “helping him so swiftly.”

The 75-year-old, who remains in serious condition in a hospital following the attack, also received words of support from a number of prominent writers. JK Rowling, the author of the Harry Potter series, called the news about the attack “horrifying,” while Stephen King expressed his hope that Rushdie is “ok” while blasting his assailant in harsh terms.

Booker-prize winning author Ian McEwan called the attack “an assault on freedom of thought and speech.” Another winner of the Booker prize, Arundhati Roy, said the assault on Rushdie was “really destabilizing for a lot of us.” Suzanne Nossel, the head of PEN America, an organization that defends freedom of expression for writers, also condemned what she called the “brutal premediated” assault on Rushdie. “We hope and believe fervently that his essential voice cannot and will not be silenced,” she added.

Meanwhile, the Iranian media has also closely followed the developments around the attack. Some of the seemingly more hardline outlets even wrote about it in positive terms. The Asr Iran outlet cited Iran’s Supreme Leader Ayatollah Khamenei as saying that the “arrow” shot by his predecessor “will one day hit the target.” The news outlet detailed the circumstances of the death sentence issued in Iran against Rushdie in a lengthy piece that portrayed the publication of the novelist’s book, ‘The Satanic Verses’, as part of the Western campaign against Islam and Iran in particular.

The newspaper Kayhan published a piece in which it described Rushdie’s attacker as a brave person while branding the author himself “an apostate.” Another Iranian newspaper, the Khorasan daily, published a story titled: “Satan on the way to hell.”

Iran’s major news agencies, meanwhile, have taken a somewhat more subdued tone in describing the incident. The IRNA news agency published a recap of a 2008 piece in which the publication of ‘The Satanic Verses’ was described as part of the Western “cultural invasion” targeting Iran and seeking to tarnish the supposedly growing appeal of Islam in the world and the “awakening” of Muslims.

Mehr News Agency issued a piece explaining Khomeini’s decision to call for Rushdie’s execution, saying that “the profound understanding and foresight of [Ayatollah Khomeini] has been clearly proven” decades after the order was issued.

Mohammad Marandi, an advisor to the Iranian delegation at the Vienna talks aimed at reviving the 2015 nuclear deal, questioned the timing of the attack by saying that it took place as “we [were] near a potential nuclear deal.” He also called Rushdie a “pawn of the empire” and said he would not be “shedding tears” for an author who he says “spouts endless hatred and contempt for Muslims and Islam.”

Award-winning novelist Salman Rushdie was stabbed at a public event in New York state on Friday. He has repeatedly received death threats from Islamists for his work. The novel ‘The Satanic Verses’ is particularly seen as offensive by many Muslims. Following the attack, the author was placed on a ventilator and has been unable to speak, according to his agent.